Heileen 2 - The Hands of Fate 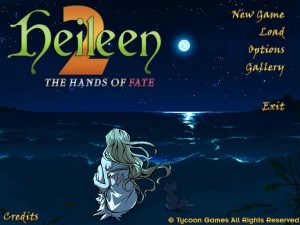 My Heileen 1 review can be found here.

Heileen 2 takes place immediately following the events of the first part; Heileen was shipwrecked while on her way to America and washed ashore on some Caribbean island. Rather than continuing with one of the endings of the first VN, the sequel starts at a newly invented neutral ending which has all the previous love interests lost at sea. The only characters confirmed alive are Heileen, Ebele, Robert and Black the talking cat.

Tossing the previous installment’s love interests overboard isn’t the only change either. Romance, which was at the core of the first Heileen, is now relegated to a side event. There’s still quite a bit of talk about love, but very little actual romance between the characters. Don’t worry, Heileen still gets sexually harassed constantly.

The new story of Heileen 2 is sort of like Dora the Explorer with a less cohesive plot. Heileen and her friends find a magical map and explore the island one icon at a time. This map is spawned by some magical tarot cards they find buried in the sand — oh hi Deus ex machina. Those tarot cards continuously spawn new plot devices. Heileen and her friends need rope, tarot cards provide rope. They need a map to start exploring, tarot cards take care of that too. Black the all-knowing plot exposition cat provides a running commentary and instructions on how the cards work.

Each night, you get to pick a card which causes Heileen to have a dream appropriate to the vice/virtue printed on each side of the chosen card. The dream sequences contain one choice which determines whether you get the vice or the virtue ending for that card. After the dream ends, it spawns an item in the real world which is almost always immediately useful for some problem Heileen encounters directly afterwards. The choices in the dreams are pretty lousy, the options have unexpected consequences and the assigned virtue/vice at the end is often a poor fit for the circumstances. For example, standing by idly as you let your uncle get robbed doesn’t exactly scream "charity" to me.

You’re forced to go through each card a total of three times. You do get a new dream each time, but the 21 disjointed dream sequences are painfully tedious to read through. The dreams provide character development and backstory for a bunch of characters who are now missing at sea or otherwise unrelated to the main plot. Lora is retroactively changed to a tragic selfless woman, caring for others and doing almost anything for the sake of her family. The dreams also introduce Jonathan, John’s clone brother who’s an artist and has the same imaginary womanizer personality Heileen kept accusing John of in the previous VN. Through some plot device spawning we find out more about the way in which Heileen’s parents died, but unfortunately the explanation relies on everyone involved being mentally challenged.

Outside the dream sequences, the plot follows a simple structure. They walk around the island a bit while Heileen solves some simple problems with her plot devices. This eventually leads them to the pirate ship icon on the map where they spot a pirate ship sailing by (yeah, really). They signal the ship with their magically spawned mirror after realizing the giant mirror icon on the map was trying to tell them something. One of the pirates is Heileen’s childhood friend, something which she’s shown in a dream sequence but she’s too stupid to remember. The other pirate with a personality is a half-naked woman, how time/place-appropriate.

Heileen 2 has a whopping 15 endings which certainly sounds impressive, until you discover each ending is only about a minute long. Not worth the effort of unlocking multiple endings at all, especially not with a main story that’s twice as long as Heileen 1. The quest and score systems are carried over near identically from the first VN and they’re still completely useless. Quests solve themselves without any conscious decisions from the reader and the score still only determines your ‘rank’ at the end.

As a whole, Heileen 2 is much more polished than its predecessor, but the plot really goes off the deep end (hah). An all-knowing talking cat is pretty bad, but the plot-device generating tarot cards are even worse. The dreams are often boring and only vaguely related to the main plot. Important future events are spoiled by being clearly depicted on the map and the VN abruptly ends right as things might finally start to become interesting.

Since this is a direct sequel, the majority of the sprite work is simply reused. The sprites still look pretty good aside from the occasional odd-looking expression. Well, except the child-sprites for Heileen/Marie used during some of the dream sequences — those are absolutely terrifying.

We actually get some event graphics this time, too bad so many of them are reused to death. There’s only so many times you can show the 3-4 images of Heileen sitting on the beach or starting out over the sea before it starts to get tedious. Backgrounds are much, much better this time around which becomes especially apparent during dream sequences taking place on the ship from Heileen 1. The contrast in background quality is staggering.

Most of the silly sprite effects are gone. There’s the occasional overly dramatic zoom, but that’s about it. The zooms are very jittery, possibly due to internal coordinate rounding somewhere. Even though it looks less graphically intensive, in reality it really isn’t. I had severe framerate drops during transitions and long hiccups when the engine needed to load a new sprite. Heileen 2 runs far worse than any other VN I’ve ever tried.

A major selling point is the added voice acting; every character aside from Heileen is fully voiced. Maybe Heileen isn’t voiced due to budget concerns, because I can’t think of any other reasons not to. The voice acting is a wondrous compilation of dubious accents. In some cases it’s only a mystery where they got their accents (John, Black) in other cases the accents themselves are all over the place (Marie, some side characters). In general the quality is alright, but having nearly the entire cast speak with different (dodgy) accents can get tiresome.

If you think being fully voice acted meant there would be background music, you’re sorely mistaken.

While Heileen 2 has a much more polished presentation than the first part, the story is still crap (but in a different way). It’s a mostly inconsequential side-story in-between Heileen 1 and 3 with only some character development keeping it from being entirely superfluous.