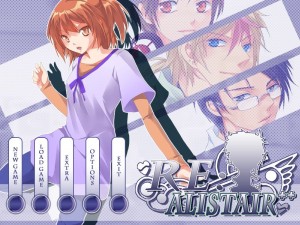 genre otome, dating sim
creator Sakevisual
website http://www.sakevisual.com/realistair/
summary Girl gets trolled by some guy in an MMORPG, attempts to find him in real life.

Merui and her online friend are fighting a particularly strong boss in the MMORPG Rivenwell Online. Mere moments before dealing the final blow, a character named Alistair jumps in and steals their kill, taking the loot for himself. Merui isn’t too pleased and challenges Alistair to a duel, but just as they enter the arena she loses connection to the game’s server.

She later finds out Alistair got disconnected at the exact same time — so they "must’ve been on the same network". Uhm no, it doesn’t work like that — the network outage could’ve been over a much larger area. Anyway, since Merui was playing her MMO at school (huh?) and the school keeps a publicly accessible log of all computer use (what?!) the list of suspects can be narrowed down to just three boys in her school. She confronts Alistair in the game and makes a bet she can discover his real identity within 30 days.

After the short intro, RE: Alistair++ rushes head-firty into dating sim land and while first week still has a decent amount of story, it quickly dwindles down to near nothing. By the third or fourth week you’re like a rat in a Skinner box, repeatedly pressing the same buttons over and over again but the ‘food’ doesn’t come out anymore. The simulation part itself is deathly boring and largely comes down to pressing button A/B/C a certain number of times.

President of the computer gaming club, fills the ‘cool guy with glasses’ slot. Hangs out in the computer lab a lot. He’s also an arrogant asshole and goes out of his way to be as mean and condescending to Merui as possible. Sure, eventually he warms up to her and stops being such a jerk, but still… As you’d expect in a shoujo/otome story, he has some type of tragic past/home situation. His mom got diagnosed with cancer last year, forcing him to change schools. This of course never really ties in to the story in any meaningful way other than to somehow excuse his dickish behavior. There’s a half-hearted attempt to make his school transfer a bad rumor about him ("it must be due to something he did") but the true reason is quickly explained before it causes any real drama.

Merui gets paired up with Shiro for a school project, which becomes their main source of interaction. He has a lot of pent up anger over his tragic home situation (yes, again). He’s extremely butthurt over his parents not being home enough — dude, you’re in high school already. His Ned Flanders-like demeanor in dealing with negative emotions causes him to occasionally snap and become enraged. What a sweet kid. At the very least, he’s the only love interest who isn’t an outright dick to Merui at the start.

Derek is the student council vice president and star basketball player. He seems pretty superficial and immediately hits on Merui the second he notices her. Derek also has the nasty habit of strong-arming Merui in doing things she doesn’t really want and generally being kind of a dick. I didn’t appreciate when the script tried to overrule my own judgment by stating "I guess he is kinda cute". Shockingly (not really), he has a tragic home situation (I’m seeing a trend here) to excuse him being a jerk. His parents are very strict, don’t even want him playing video games. And yet he’s goofing off at the mall all the damn time.

I’m not too fond of dating sims in the first place, but the simulation gameplay in RE: Alistair++ is especially dire. At the same time it’s too simple and underexplained. There are only three stats (and money) which you grind by selecting an evening activity every day. Every. single. day. A stamina system is conspicuously absent, as is any incentive to raise your stats in a balanced way. Stat increases don’t appear to slow down and the only stat check seems to be at the very end of the 30-day time limit. Basically, stat raising could’ve been replaced with a slider at the beginning of the game with no adverse effects whatsoever. To get the good endings you need to pass certain stat requirements in each stat (not just the preferred stat of a specific love interest). The specific values required are completely arbitrary.

Most of the sprites are pretty decent and they even have actual poses. Some sprites are drawn a bit inconsistently, Merui in particular. Outside the MMO scenes and event CG, Merui is displayed as side-image only. For once, the side image doesn’t push the dialogue box to the side — there’s actually space reserved for the side image. Shocking, I know.

Backgrounds are mostly adequate 3D renders. The MMO backgrounds are absolutely awful (think low-budget early 90’s 3DCG). I guess they needed to look sufficiently different from the low budget late 90’s 3DCG backgrounds used everywhere else. Lots of event CG for a free game (20 excluding variations) with quality comparable to the sprites. Many of the event CG use simplistic or recycled backgrounds, but it’s not too blatant.

The user interface has a nice cohesive style. Quick access buttons for save/load/stats are placed on the right side of the text box, with the labels/icons only appearing on mouse-over — therefore giving no speed advantage over a regular menu unless you memorize the buttons positions. Some of the menus are a little clunky, particularly the shopping interface which doesn’t show you the item descriptions before you attempt to buy the item. The email system requires constant manual checking if there are new emails and right-clicking causes it to bug out (hides all visible text until you click again).

Music selection is pretty good with a couple of catchy tunes. The extremely repetitive morning/afternoon/evening routine is impossible to ‘get right’ music wise. The day segments follow each other so quickly the constant music switching becomes an annoyance, but if you don’t switch everything starts to blur together.

One thought on “[review] RE: Alistair++”