The Halberd and the Tiger 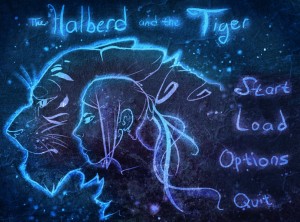 Li is a spirit walker who, with the aid of her trusty 200+ year-old tiger Ren, tracks down and vanquishes evil spirits. The Halberd and the Tiger opens with Li monologuing about her current circumstances. She’s interrupted by a sudden scene change showing a little girl in a kimono. The girl turns out to be Li and the scene a flashback, but it takes a few pages for that to become clear. It’s not entirely clear to me what the flashback is supposed to accomplish, other than perhaps to give Li some type of tragic childhood and explain when she got Ren. Neither of those things really matter in the context of this VN and the flashback is a hiccup in the narrative.

While resting after a battle with a grule (a type of evil spirit), Li and Ren bump into a monk named Saka. He explains to her he’s the caretaker of a nearby shrine. Li decides to accompany Saka to the shrine in order to check up on the shrine’s spirit. Ren acts suspiciously hostile towards the monk, perhaps Saka isn’t as friendly as he seems…

Writing leans heavily towards purple prose, with lots of extraneous adjectives strewn around everywhere. It’s generally written in an (overly) poetic style, but then occasionally suddenly breaks that tone ("nasty ice elemental", "flip out"). The style of writing is also more like a normal book than a visual novel, relying more on narration compared to the VN standard dialogue-heavy style. In several instances things clearly visible on the screen are redundantly described in text form as well.

The core of The Halberd and the Tiger is a straightforward traveling-exorcist type ghost story — exorcist encounters a spirit on his/her travels, fights and defeats it. Nothing too revolutionary, but it’s perfectly serviceable for a short 20-30 minute VN like this one. The ending has a weird bit where Li suddenly starts feeling guilt for taking away the monk’s livelihood as shrine caretaker by vanquishing the corrupted spirit and destroying its shrine in the progress. Uhm, Saka was possessed by that evil spirit. Personally, I’d rather be unemployed than possessed.

First let’s get this one out of the way — that’s not a halberd she’s holding. Rather, it appears to be a kind of guan dao or something.

The sprites are drawn in a distinctive style and are quite pleasant to look at. An extra thick black outline really helps characters stand out from the background. Full-body sprites are relatively rare in visual novels, but it works here — it matches the storybook feel of the writing and side-textbox. Backgrounds are considerably more basic, but still perfectly serviceable.

The Halberd and the Tiger makes a lot of uncommon choices in its presentation. Aside from the full-body sprites it uses a non-standard resolution (1000×740) and a NVL textbox squished to one side. The narrow width of the textbox causes excessive line-wrapping which is mildly annoying. A lot more annoying are wait-clicks on some commas (seriously, why?) and "…&quot taking several seconds to appear in a forced wait.

I originally read the 1.0 version of The Halberd and the Tiger which had a very hard to read font (all screenshots here are from that version). An updated version, confusingly also numbered 1.0, replaces the font with something more readable.

The soundtrack is largely unremarkable aside from an out-of-place sounding electric guitar track which plays during the fight scene. Near the end of the VN, a relatively solemn scene suddenly breaks out a ridiculously happy and upbeat tune without any sort of pause between the two.

The story, while nothing special, is perfectly decent if you’re able to get past the writing style. Adaptation from regular story to visual novel format is lacking. Artwork is rather good for a short freeware VN.