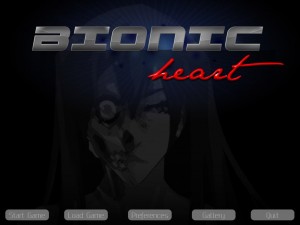 genre sci-fi
creator Tycoon Games
website http://bionicheartgame.com/
summary The calm life of Luke Black is shook up when an escaped android turns up on his doorstep.

Bionic Heart takes place in London of the year 2099. Years of war have permanently damaged the climate and now it always rains (nothing new for London then). Power is transported to the earth through solar panels in space. None of this really matters. We follow the life of Luke Black, a bio-informatics engineer working at a company called Nanotech. His long-time girlfriend Helen is bugging him about marriage again. She has a point; they’ve been engaged for ten years already. Luke makes up some bullshit excuse about how people "rarely get married these days", but seems incapable of articulating exactly why or how it applies to their situation.

One day, Luke hears a female voice on the other side of his front door. Odd, since just a moment before he was bragging about his amazing security system. The voice orders him to open up or she’ll destroy the door. Like a dope he opens the door, revealing Tanya; an escaped prototype android. She has amnesia (how convenient) and needs Luke’s help. Fortunately for her, Luke has no qualms about harboring a fugitive in his home (not even if you suggested living together with Helen in the previous scene). To be fair, there is the option of calling the police on Tanya at almost any point of the story. Going to the police rarely has the intended effect, usually leading to something bad happening to Luke or Tanya magically disappearing before they catch her.

Despite being marketed as a visual novel, Bionic Heart really wanted to be an adventure game when it grew up. It has that classic move/look/talk adventure game interface and way too many endings for its length. Despite playing like an adventure game, it rarely makes good use of the extra interactivity. Puzzles are non-existent and the adventure game segments are pretty much linear. The move system works OK when you’re clicking on a map to move across town, but indoor movement can be a pain. You can only move between adjacent rooms which gets annoying fast when navigating the weird layout of Luke’s apartment. Another not-quite-VN feature is the oversized relationship bar which pops up whenever you do something to make one of the main characters (dis)like Luke.

The plot turns into a hi-la-ri-ous romcom full of amazingly engaging developments such as Luke coming home from work and walking in on Tanya while she’s in the shower. Exactly why she waited all day to take a shower is a mystery to me. But wait, there’s more. At precisely that moment, Helen suddenly decides to come over and Luke has to hide Tanya while he distracts Helen. Simply thrilling. There also the small matter of Helen (thinking about?) cheating on Luke with his best friend — classy lady. Despite the sci-fi setting, Bionic Heart spends most of its time on these types of shenanigans.

That’s pretty much it for the core story too. Shortly after the shower scene the plot starts branching into a million (well, 24 to be exact) different endings, none of them particularly long or interesting. Endings often feel arbitrarily matched to the choices made rather than a logical consequence of your decisions. Many of the endings are just a few lines of dialogue, followed by a single screen dryly summarizing what happened afterwards.

The ‘routes’ themselves contain a number of strange, bizarre or otherwise far-fetched events and ideas. In one route, you suddenly learn that the planet Mars has been secretly terraformed by androids and the government covered it up. The habitable areas are under threat from never-before mentioned aliens and Luke’s company is secretly creating android guards for protection. Tanya was intended as a prototype for one of these guard robots. In another route we learn about the greatest challenge to developing an android as human-like as Tanya. Artificial brains just aren’t good enough, so instead they just implant a human brain. In the case of Tanya, she was a famous anarchist serial killer whose brain was stolen decades ago after she got caught. I don’t care they erased her memory, what lunatic would give a super-powered android body to an anarchist murderer?!

Bionic Heart is mostly just pretty bland. The sci-fi bits lack credibility and relevance. It instead focuses on Luke’s relationships, but the guy himself isn’t all that interesting and the people he interacts with feel underdeveloped.

Bionic Heart is fully voice acted and goes a little further than most visual novels with its definition of ‘fully’; even Luke’s thoughts, the epilogues and random lines of neutral narration are voiced. The voice acting itself isn’t all that good, although part of the blame lies on the sometimes awkward wording of the script. Luke sounds unnatural and the two love interests are both clearly voiced by the same person.

Helen and Tanya have about 5 sprites each — a single normal one and a bunch of lingerie/swimsuit sprites. Bionic Heart uses some very eccentric poses for its sprites, which is probably not the greatest idea when each character has only one applicable sprite for any given situation. It just makes the lack of pose changes that much more noticeable. Female characters look quite masculine (broad shoulders, big hands, angular features), Helen in particular. Unfortunate facial expressions making characters look insane are also disturbingly common. Backgrounds are functional though not particularly good; lots of crooked/messy lines and some occasionally dubious perspective.

There are no event graphics whatsoever, although you do get the occasional special-purpose sprite. At least there’s a decent amount of background images. Barely any music either, but the voice acting masks it quite well.

You’ll be disappointed if you were expecting sci-fi, Bionic Heart spends more time on relationship drama. The plot lacks impact due to excessive branching making a short game feel even shorter. Voice acting was an interesting attempt, but the execution is lacking.

One thought on “[review] Bionic Heart”