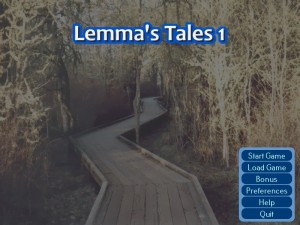 genre bishoujo
creator Blue Lemma, Hinoraito
website http://www.renai.us/game/lemmas-tales-1.shtml
summary "You" and a girl your age get lost during a "get to know your neighbors" camping trip.

Lemma’s Tales 1 is a remake of the 2003 title Tales of Lemma 1 with redone artwork. It was ported to Ren’Py with some added developer notes, but otherwise the script remains unchanged from the decade old original.

You (main character is nameable) are a young man of undefined appearance, roughly college-aged and on your way to the meeting place for a "get to know your neighbors" camping trip. Once there you bump into Miko, a first year enrolled in the nearby Raigaku University and the girl you sat next to at last week’s basketball match. As it turns out, she lives just down the road from you. The two of you get separated from the rest of the group when you hear a strange beeping noise coming from the woods and decide to wander off in search of its origins.

So yeah, the basic premise is: you and generic cute girl are lost in the woods, find your way back. This VN clearly isn’t raising the bar for epic storytelling or anything, but a nice simple story can be fun too. The original release started with a disclaimer it was intended as a practice game, although that disclaimer appears to be missing from the remake. The suggested age rating also changed from 15+ to 13+ for some reason. Lemma’s Tales really does feel like a practice game; a simple and short story experimenting with some choices and a bit of gameplay (yeah, I’ll get to that later). As a whole, the script has aged reasonably well aside from the groan-worthy random Japanese names.

There’s not much to the story or choices; everything just plods along in genericness. Actually, the only thing you really get to do is decide how much of a creeper you want to be. Early on, you get a few classic dialogue options like "I hope some hot babes will show up" and of course "is she hot" as a response to any female being mentioned. At one point, about midway through, it kind of crosses a line. While you’re alone with Miko, lost in the wilderness, there’s a decision point that lets you pull down her pants. Presumably as some kind of "joke"? Alone in the woods with no-one else around and some guy she barely knows starts ripping off her clothes — creeper alert thoroughly triggered. However, and this is a big however, you’re never forced to do any of this — you’re always given a choice.

Now, about that gameplay segment I mentioned earlier. While walking through a field, you’re suddenly attacked by giant killer mushrooms which triggers an RPG-style battle sequence. Aside from the whole thing coming completely out of left field, the characters don’t seem all that surprised or disturbed from being attacked by killer mushrooms. The battle itself is basically just spamming the attack button until you win, maybe heal once if you’re unlucky. None of it makes much sense and it doesn’t add to the story, but in a practice game I can sort of understand why you’d shoehorn in a gameplay segment like this.

Other highlights include "walking in on her while she’s changing" and a squirrel dragging along an item multiple times its body weight. All in all, a very basic bishoujo VN, interesting as a piece of history but not much to it otherwise.

Of course it has to have a random RPG battle.

Sprites have just one pose, but otherwise there’s a good amount of artwork. It even has a couple event CG of decent quality. The new artwork is considerably better, except the weird balloon heads that creep me the fuck out. I’m used to some pretty extreme character designs, but those mushroom-shaped noggins just look wrong. There’s an amusing mismatch between the 2003 writing and much newer artwork — the "baggy jeans" have been replaced by a more modern fit in the artwork, but not in the text.

Backgrounds are drawn too, as opposed to the photo backgrounds of the original. A depth-of-field blur is used, but it doesn’t really work here. From an arbitrary distance, the background is uniformly blurred rather than the blur factor gradually increasing with depth. The drawings themselves also feel too abstract for a "realistic" effect like DoF.

Music appears to be unchanged from the 2003 version. It’s not bad, but the instrument samples remind me a little too much of late 90’s MIDI music.

The user interface is mostly stock Ren’Py, but at least the default font was changed. I think the title screen was supposed to be a throwback to the original version, but it ends up just giving a bad first impression. The lack of a custom icon for the executable and stock Ren’Py main menu don’t help either.

While interesting as a piece of history, Lemma’s Tales 1 is a bit bland by modern standards — its only standout feature is the option to roleplay as a massive creeper. The new art is pretty decent aside from the ridiculous balloon heads.