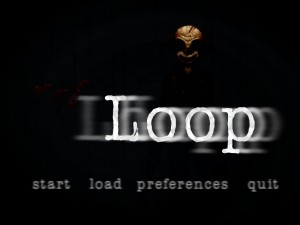 You play as an unnamed writer who has a hard time going back to sleep after randomly waking up in the middle of the night. You get to pointlessly fuck around for a while until you’re sleepy enough to go to bed so a clown can kill you in your dreams, looping you back to the beginning of the game.

The Loop is one of the most obnoxious games I’ve ever played. First of all, pointless choices. Why the fuck do I have to decide whether or not I want sugar in my coffee. How in the hell is that important enough to warrant interrupting the story? The ludicrous number of options seems to primarily act as camouflage in order to hide the actual puzzles in the game.

The first act of the game requires you to solve a number of puzzles in order to advance, but it forgets to tell you that fact. Solving these puzzles gives you little to no feedback you’re on the right track. What also doesn’t help is that solving puzzles magically changes the state of the world in order to unlock the next puzzle. After solving a puzzle you’ll basically have to randomly interact with everything until you find the next one. Hints are sometimes given, but they’re often hard to find. The first chapter has a ‘tips’ system where opening the letter near the bookcase gives you a hint for the current puzzle (the letter’s contents change depending on which puzzle you’re on). How the hell you’re supposed to figure all of this out, I have no clue. I only got it from reading the game’s source code.

The moisture ring is a neat touch.

But then you can’t find the next puzzle and no matter how many times you reload you just can’t seem to find it. Whoop, turns out after you solve the initial batch of puzzles you need to let yourself die and then during the next loop there will be a new secret puzzle to solve. Solve that one and let yourself die again to continue to the next phase. Again, practically unguessable without the hidden hint system and the next iteration of a time loop changing is completely counter-intuitive.

After a short encounter with the clown, you’re thrown into another time loop. This time you’ll have less nonsense options, but there’s still the persistent problem of magically appearing options after fulfilling some arbitrary unrelated requirement. Many of these puzzles would be a lot more fair if the rules of the world made any sense. Nice to see you have a magical dream-door opening guitar, but that’s not really something which makes sense unless you explain how it works.

Not that scary anymore.

Act 3 starts with another clown face-off. The clown by this point has turned into a literally wine swirling bad guy and he’s giving you his villain speech. If you haven’t penned down random factoids about Mr Chuckles here, you’re eventually reduced to a single "kill yourself" choice. Why aren’t I given the choice to not kill myself? Seems a rather large oversight in the free choice department. After close encounters of the clown kind you’re given directions to the final puzzle room. However, there’s a secret puzzle you need to solve first to avoid ending up in an unwinnable state later on (hooray).

The final puzzle room has a real-time death clock. Even worse, the puzzle is randomized every time and saving in the room crashes Ren’Py (which breaks the time limit room until you restart the program). What kind of clown packing goblin puts a timed puzzle in a supposed ‘visual novel’? The puzzle itself is annoying as usual: the room is full of red herrings and you need to do something arbitrary to unlock the hint which lets you distinguish the real from the fake.

Just one final showdown on the roof and it’s over. If you haven’t solved the hidden optional puzzle, you always die. If you didn’t pick up the optional revolver in the last puzzle, you always die. If you use a keyboard or gamepad to play the game, you always die. The final puzzle is a reaction minigame where left mouseclick suddenly turns into "fire gun" for one screen without any visual hint this is the case. Holding the skip key or pressing Enter bypasses the screen entirely, instantly killing you. Even if you do ‘win’, it rather misleadingly tosses you back to the beginning of the game as if you’d lost only to divert after a few lines.

The presentation is actually rather polished with an impressive eye for detail. Drinking coffee puts a moisture ring on the paper textbox (nice touch) and showering makes the bathroom fog up. When you play music in the bedroom, the volume changes depending on which room you’re in. Random flashes of the clown are actually somewhat creepy and the minimalist soundtrack helps set the mood (although "Pop goes the weasel" isn’t going to be creepy no matter how hard you try).

Sprites are barely used, but you’re alone 98% of the time anyway. At several points in the game you get to see your own reflection which looks a little goofy, especially in clown makeup. The clown itself it kinda creepy during the first loop, but gradually becomes less and less menacing. Backgrounds are 3D renders and there are quite a lot of them. They’re competently modeled for once, but the lighting is still crap as usual.

Rollback is disabled, no text log to replace it. Difficulty settings are labeled crazy/insane/demented which tries to add flavor at the cost of obfuscating their meaning.

This game ain’t clownin’ around — you’ll die again and again until you accidentally discover what to do. It’s unnecessarily hard due to the lack of any semblance of logic or cause/effect and a number of elements which do nothing but frustrate the player. It also has very little to do with visual novels, consisting almost entirely of adventure game puzzles with very little plot.