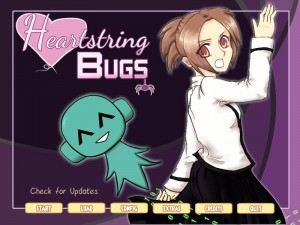 I tried. I really tried, but Heartstring Bugs is too insufferably bland to finish. After two hours of sensory deprivation with barely even a hint of plot, I called it quits…

Elly (nameable) is a bland girl in a bland school. Now moving into her second year of high school, she’s determined to change her life around and actually start interacting with other people. On the first day of her second year, she runs into a Great Gazoo named Vi. The creature grants her the magical power to see people’s emotions (rarely mentioned afterwards). Her invisible pet alien is nearly useless and barely relevant most of the time.

My biggest gripe: absolutely nothing happens. It’s just the daily high school life of a boring person, with the occasional random event thrown in; Halloween parties, tournaments for the club Elly joined, finals week, etc. Nothing you haven’t seen a million times before. The events themselves are often told by dryly summarizing what happened, making them even less interesting.

The characters aren’t interesting enough to carry the story either. Actually, there’s barely any story at all in the first two hours. When I gave up after two hours, I was only at the end of the first year (out of three). The simulation is way too slow and even though there’s a decent number of story segments, most of them are short, stand-alone, and not all that interesting. Sometimes there’s a hint of some larger narrative, but then the game forgets about it for months. There seems to be a story… somewhere, hidden behind hours upon hours of unexciting stat grinding. The simulation gives no feeling of progress or accomplishment and there’s really no motivation to continue — the story is too sparse and uninteresting to motivate you past the simulation grind.

Nothing you haven’t seen before, just generic dating sim stuff. You mostly figure out what to do in the first 5-10 minutes, then rinse and repeat for 20 hours. The game makes you manually schedule an event for every single day in the entire 3 year game span, but at least has the decency to let you plan out Mon-Fri at once.

Every single birthday must be celebrated, and with the same generic event (ugh) — it just gives you a selection of what present to buy… I do like that the game actually keeps track of such things for you, rather than forcing you to remember yourself. A ‘mood reply’ system forces you reply to "how do you feel about X" questions with a vague emotion rather than a concrete reply. It also breaks immersion when people constantly ask you about your general opinion of someone.

The most interesting gameplay bit is the somewhat extensive dress-up system. Unfortunately, the game does a rather poor job of explaining its purpose. It’s not really integrated all that well either, the whole thing is basically hidden in optional sub menus.

The sprite work is serviceable. Most characters have multiple outfits and expressions, but only a single pose. Backgrounds are generally pretty bad. Quite a lot of them have problems with odd horizon positions. I can’t say too much about the event CG, seeing as I haven’t really encountered any during my playthrough. From what I’ve seen, they’re not too bad. Music is decent, with a good amount of variety but nothing outstanding. Sound effects are notably absent.

I’m not really a fan of the user interface. The textbox is functional and all, but the GUI for the sim part kinda sucks. Prime annoyance: the day planner doesn’t display your current stats, instead preferring to show a giant slab of empty space. If you want to know your stats, better go looking for it in a sub menu. Similarly, affection bars and the entire dress-up system are hidden in sub menus as well. Special weekend-only events often require you to traverse several menus deep which can get annoying. Stat raise animations are unskippable (a crime against humanity).

Rollback is disabled. Whether it’s due to programming difficulties or insanity I do not know, but it’s certainly annoying — especially considering there’s no textlog either. Saving is also prohibited unless at the day planner screen.

It’s not awful or anything, just a watered down version of the more popular completely generic dating sims and with a worse GUI. The story takes a million years to get started.