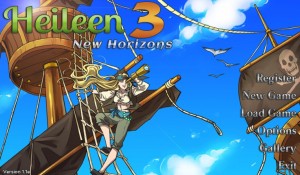 The long awaited final part in the Heileen trilogy. I also reviewed the first and second parts. Somehow, this third part turned into a simulation game rather than a visual novel.

Last time on Heileen: after getting shipwrecked on her way from Liverpool to America, Heileen washed up on an island with her new friends Ebele and Robert. They eventually escaped by hitching a ride on a passing pirate ship. In an instance of ludicrous coincidence, the pirate captain turns out to be Heileen’s childhood friend. He agrees to temporarily stop all piracy (his only source of income) in order to go on a wild goose chase, looking for other survivors who may have washed up on nearby islands. Clearly, there’s no way anyone could’ve died from something as trivial as a 17th century shipwreck.

The plot of Heileen 3 picks up immediately where the last game left off… sort of. The beginning is a bit awkward as you try to figure out which of the many endings of Heileen 2 turned out to be canon. This final part starts with no particular affections for any of the romanceable characters from the previous two installments. In fact, Robert isn’t even romanceable anymore. Instead, you get to romance John twice — oh no wait, that’s his identical twin brother, Jonathan.

The game is split into two halves (sold separately): a regular (otome) version with 4 male love interests, and a yuri version with 4 female love interests. The two share the same simulation gameplay core and main plot, but with separate romance options. Story is mostly told through short scenes, usually only a couple of minutes long, sandwiched between the grinding stat-raising gameplay.

Only the romanceable pirates have a sprite; captain Morgan (childhood friend pirate) and Juliet (underboob pirate). Other pirates in the story are off-screen and/or nameless — I don’t think anyone else in Morgan’s crew is ever even named. They just act like an amorphous blob of identical pirates. Sebastian is the only new (non-throwaway) character Heileen meets on her travels. After she randomly faints in the middle of the road (for no good reason), Sebastian carries the unconscious girl to his home and steals from her. After finding Heileen and discovering the theft, captain Morgan immediately decides to recruit the shirtless kidnapping thief for his crew. Truly a brilliant commander.

Hiding behind a wall of choices.

Choices in this game are primarily an instrument for manipulating stats. This is reflected by the text descriptions for each option, forcing you to choose between high-level strategies rather than concrete conversation options (breaking immersion). The consequences of decisions are often hard to predict, with sins/virtues getting arbitrarily slapped on decisions with sometimes rather dubious justification. For example, say you miss your stepmother and you’ve just committed the sin of lust.

Somehow, Heileen 3 seems to have even less regard for the time period than its prequels. Life on a 17th century pirate ship is easy and pirates are never more than slightly rude — the crew on Heileen’s ship to America was far more threatening. Morgan can apparently just stop pirating for extended periods of time without running out of food, losing crew, or mutiny. When some pirates are picking on Robert and Ebele, racism isn’t even a fleeting thought. Heileen can ‘entertain’ the crew by dancing in the least appropriate outfit imaginable and every single pirate remains polite and respectful towards her.

The writing can get pretty hokey. Every single one of Heileen’s friends surviving the shipwreck was something you could see coming a mile away, but that doesn’t make it less silly. Heileen randomly faints on two separate occasions in order to progress the plot. She also gets invited to a pirate council meeting where Morgan immediately lets her call the shots. The romance writing is about as subtle as Juliet’s outfit ("He is really good looking, and I feel myself getting attracted to him!"). By the end of the demo, Heileen’s friends are seriously thinking about becoming pirates, never once considering the ethical implications.

Lack of consideration for any real world consequences is kind of a theme in this game. It feels more like children playing at being pirates in an overly idealized world. That’s odd, because the especially the first Heileen wasn’t nearly as "children’s cartoon" is this one. The series started off with family problems, allegations of murder and adultery, slavery, etc. and now for the final installment everything has been reduced to something more akin to a pirate-themed ride at a theme park.

Black, the plot exposition/tutorial cat is back once again to show you the ropes and explain the gameplay to you. Returning as well is the sin/virtue system, with the same odd mismatch between selected choices and results. By far the majority of your play time however will be spent grinding for skill levels. You have basic skills (trainable at any time) and advanced skills (only trainable when the ship is anchored). To train an advanced skill, you also have to pass the minimum skill level requirement for its two related basic skills.

Increasing skill levels takes absolutely forever — going level 1 to level 2 in a single basic skill requires training around 17 times. The end goal is to unlock a profession ending which requires a specific sin/virtue and one advanced skill at a sufficient level. In practice this means you just arbitrarily choose a desired profession at the start of the game and grind for the corresponding advanced skill. There doesn’t seem to be any motivation to balance skill levels, nor does the gameplay change depending on which profession you’re going for. The stat-raising aspect is incredibly tedious and unsatisfying. When a "repeat last activity" button is a key part of your gameplay, perhaps there’s too much repetition.

Romance and stat-raising appear to be entirely unrelated. Some dialogue options change the affection percentage between Heileen and her potential lovers. A change in affection causes a giant affection bar to pop up, breaking immersion. In the demo at least, romance seems far less important compared to the profession endings. At the very least, you spend far more time raising your holy stat trinity with the romance feeling almost like an afterthought.

Much of the sprite work is simply reused from the previous Heileen titles. The cast is nearly identical (Sebastian is the only new character), so there would be little sense in changing much. A few additional costumes and special purpose sprites were added where the plot demanded it and Marie has been redrawn completely. Unfortunately, the new character images don’t match the old art style at all. Heileen 3 has some curious problems maintaining a consistent zoom/crop for different sprites, often leading to characters that look weirdly out of proportion when standing next to each other. Chibi sprites are used for the "performing activity X" screens. They’re probably meant to look cute, but I think they’re rather unappealing and a bit creepy.

Backgrounds are a mix of recycled ones from the first two Heileen games and a handful of new ones. This background grab bag leads to a collection with wildly differing art styles and levels of detail/quality. Because you spend so much of your time at sea on the pirate ship, just seeing any other background whatsoever is a happy event. There’s a town background with a tavern clearly marked "The Lucky Coin" which is inexplicably used for multiple islands.

Music has never been a strong point of the Heileen series. This final part only has a couple of tracks and regularly falls silent, but at least it has music this time around. The silent parts use environmental sounds to prevent the soundtrack from turning into "my computer’s fan noises Vol. 1".

While the textbox and other on-screen GUI elements are decent enough (I’ve never liked a resizing textbox though), the status screen is kind of a mess. Perhaps it’s a consequence of having 36 stats of which only 4 are interesting per playthrough, but it feels cluttered and inconsistent. You also return from the status screen by clicking on a bookmark for some reason. The task selection screen (which is where you spend half the game) is particularly bad. It’s just a big grid of a buttons labeled with flavor text. Pressing one of these buttons takes you to the sub screen explaining the button’s function. Wouldn’t labeling the buttons with what they actually do have been a much better better idea? And one requiring far less pointless memorization. At least you only use 3 buttons per playthrough, so it’s not that hard to remember.

Performing an activity forces you to sit through a short animation. These animations ignore the skip key for some reason, but at least you can click to step through the different phases — just remember to quadruple-click every time you perform an activity if you value your time on this earth.

Too much bland sim game for my tastes. Raising stats requires a ridiculous amount of repetition with no sign of anything resembling strategy/skill. The plot relies on a series of highly improbably events with no concern for the time period, or reality.