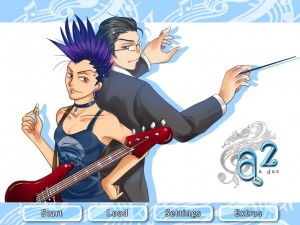 Sona Song is an excessively sassy young lady whose hairstyle seems inspired by a cross between a rooster and a certain blue hedgehog. She’s in debt to some gangster for reasons never really expounded upon. The story opens on her fist-fighting some thug in the street. He and his cartoon crook buddies come back several times, but they’re always laughably incompetent. They don’t carry weapons and prefer to attack Sona in public places, meeting her by chance rather than going to somewhere she’s bound to show up like her house…

Her plan to pay off the hilarious hoodlums involves collecting on a significant inheritance left by her estranged father, the ‘master conductor’ William Song. To get the money, she has to take over his pet project: a local community orchestra. She doesn’t give a shit until her main love interest, Hao, shows up unannounced from China to assist the orchestra. Unfortunately, he doesn’t speak a word of English (oh noes).

The language barrier plays an important role. Their only means of communication are doodles and the ‘shared language of music’. Hao’s Chinese isn’t just gibberish, there’s even an unlockable option to translate his text to English. This added realism occasionally seems to add quite a bit more dialogue for him than necessary/useful when you have no idea what he’s saying.

Branching and choices are a weak point. There are two real endings, but both are ‘good’ endings and the difference between the two isn’t entirely justified by your decisions. Because there’s no proper bad ending, you get the "everyone likes you (friendship)" even if you intentionally act like the biggest bastard possible. The negative choices seem to be ignored unless you accidentally stumble into the hidden joke ending. This third ending acts as the ‘bad end’ in a way, but you can only reach it through a very specific sequence of choices — one that’s not easily guessable. Annoyingly, obtaining the joke ending is necessary in order to unlock both the (disappointingly short) epilogue and the translation to Hao’s lines. Personally, I didn’t particularly feel like reading through the entire thing yet again after unlocking the translation, perhaps unlocking it earlier would’ve been better.

The story almost writes itself. Helped by Hao, Sona rediscovers her love of music, they fall in love, etc. Extremely predictable, but perfectly serviceable if you’re looking for a sappy love story. The endings are cute, but don’t make a whole lot of sense. Cancellation of the orchestra’s concert is pulled out of a proverbial ass. Sona goes full retard and instead of paying her debts, just gives it all to bribe the concert hall. Naturally, the money lender’s thugs attack her in broad daylight again, but she’s saved by the entire orchestra magically appearing out of nowhere to rescue her. Good thing the thugs are woefully incompetent and aren’t carrying any weapons, although somehow Hao still manages to cut his right arm in the fight (those thugs must have some sharp fists). He tries to hide the injury because he’s an idiot. Sona hurt her left arm earlier, and now they have to conduct together, using one arm each. Everything turns out a bit too conveniently well. Most of it the type of things people want to believe, but the implausibility stacks to dubious heights.

I hope you like Hao, ’cause he’s the only character with a sprite. Ok fine, Sona has a side image. Hao’s sprite gets several arm position changes, but no traditional poses. instead, several event images are used to depict key events. Quality of those varies a lot, some pretty good, some very mediocre. Unique black and white sketches of Sona and Hao in chibi form are shown. They’re not poorly done, but the cute/childish drawings seem out of place for the adult characters. The occasionally used sweatdrops, exclamation marks, etc. also seem better suited for a more cartoony art style.

Parts of the town are made of molten plastic, or at least that’s what a number of the filtered photo backgrounds seem to imply. The backgrounds mostly work, although by the end I got really tired of seeing the inside of their practice room. I didn’t think it was possible to have a worse day-for-night effect than Ristorante Amore, but the one in a2 just adds black bars to the top bottom (why?) and desaturates/darkens everything on the screen. That’s what modern shooters to to indicate you’re dying, I don’t think that was the intended effect.

It’s a sappy romance story, not groundbreaking or anything, and hurt by some dubious dramatic turns especially near the end. The lack of characters/sprites makes everything feel a bit empty. Branching is kind of shitty, you can be an asshole without consequences and there’s not enough of a difference between the two ‘routes’.