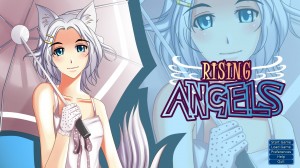 Set several hundred years in the future, Rising Angels follows the daily life of Faye Moonfallow. Her dream is to become a xenobiologist like her father which, for whatever reason, requires her to enter a military academy. Faye, like most of the cast, is a human/animal hybrid (in her case, wolf). The VN tries to allude to some kind of (utterly implausible) scientific cause, but I’m strongly leaning towards the "dev likes cat girls" explanation.

The space academy rules are rather draconian; scoring under 85% on a single exam gets you kicked out immediately. It seems designed to get rid of anyone not already in excellent physical shape or who is otherwise ‘lacking’. With a stated 20% survival rate for pilots, can they really afford to be so picky? If you take away the push-ups and the uniforms, there’s very little separating it from your average college nowadays — it even has coed dorms.

In place of a more sane way of handling character introductions, Rising Angels instead just throws the entire dozen-or-so strong cast at you in one go. Adding to the confusion are a few characters who are named, have a sprite, but play no role in the story other than maybe one or two throwaway lines. Faye’s classmates are a diverse group of assholes — they’re all structurally horrible to each other. Whether racist, paranoid, psychopath, or just a regular old asshole, all of them have a certain mean streak to their personality. Simple misunderstandings easily turn into death wishes, but then deeply rooted grudges can also just disappear out of nowhere. Rising Angels doesn’t seem to realize how mean-spirited it can get, treating a death threat to Faye as though it was merely someone shitting in her shoes. Instead of notifying the authorities and getting their ass arrested, the story switches into a goofy detective subplot. Hint: It was the only person with a motive.

Then there’s the bizarre sense of humor. A lot of it is shocking, but not quite shock comedy. Sure, you can talk about some kid getting raped in prison or scratch the bottom of the barrel even further. It ends up being awkwardly out of place rather than funny.

Rising Angels contains a lot of dumb things, but they’re mostly things on the periphery — stuff you can look past if the core plot is good enough. It’s advertised as being yuri, but you wouldn’t know it from the first hour or so. There’s little to no romance in the first part. We’re not even sure about Faye’s sexual orientation until Yoi "comes out" to Faye, thereby dragging Faye and her canonical love interest, Lenna, out of the closet with her for a convenient love triangle.

Yoi acts like a petulant child, pulling increasingly desperate and ridiculous stunts to pull Faye and Lenna apart. My active dislike for Yoi really took the tension out of the whole situation. If only this weren’t a kinetic novel and I could just tell Yoi to sod off…

Aside from the occasional WTF moment, most of what happens in the latter part of the VN is merely bland. Everything except the ending, oh man, that fucking ending… Faye and some of her friends go on a short trip to the beach. Faye has just confessed her feelings, but Lenna unexpectedly turned her down (probably something to do with Lenna’s traumatic past). For some reason, racist death-threat guy was also invited. As fate would have it, one night Faye stumbles upon Lenna having sex (betrayal!)… with racist dude (BETRAYAL!!). For some reason, Faye is totally ok with it and when the group gets together they all have a giggle about it. WTF. For some reason I can’t imagine all this going over well with any yuri fans, or well, anyone else who got emotionally invested in the plot to any degree. It ends with Faye conveniently overhearing some big secret and a "to be continued" screen. I guess this is an episodic release now.

Wha- they’re not insulting each other for once?

Rising Angels has a very uneven presentation. On one side it has things like a vocal opening song (partly wasted by using it only on the title screen), but then on the other side it uses the stock Ren’Py menus. It’s amusing to see the stock preferences screen stretched out all the way to 1920×1080, but I’m pretty sure laughable wasn’t a design goal. Only the sprites appear to be 1920×1080, the backgrounds and especially the textbox(!) look upscaled and blurry.

The sprites are quite good, especially for a (long) freeware VN. They’re single-pose sprites, but the extra large cast and frequent clothing changes partly make up for it. The standard-issue military uniform has an entirely impractical pencil skirt which even the VN has to admit, is pretty silly. Many of the sprites are angled to one particular side and occasionally characters are flipped to the wrong side by accident.

Backgrounds are all stock art I think, but they’re pretty good if not for one very obvious thing — they all look like late 90’s Japan. A lot of ‘military academy’ backgrounds are clearly just some Japanese high school. Kanji and sliding doors are everywhere, as are CRT TVs and other clear giveaways. There aren’t any event CG, not even during a somewhat lengthy action scene in the forest (you get to look at a static forest image a whole bunch).

The artwork itself is pretty good, but the way it’s put into the VN feels very sloppy and rushed. There are almost no transition effects anywhere, and the few that exist often make no sense. For example: dipping to black when a character is added to the scene. Sprites facing the wrong direction or standing comically far apart are common issues.

Rising Angels is mostly just bland. A lot about the setting is underexplained or just plain nonsensical, but little of it gets in the way of the main plot. Most of the characters are rather unlikeable and the ending is a bunch of horse shit.