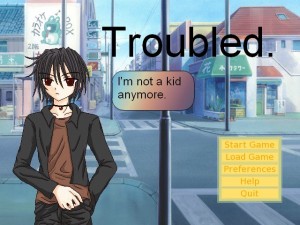 Jun wants to prove his maturity to his parents who still treat him like a kid even though he’s already a senior in high school. Apparently, convincing your parents to rent a room for you somewhere counts as being mature, because that’s what happened. Jun had to change schools due to the move.

On his first day of school he meets a mentally retarded girl named Yuu. She asks him where to find the nearest "peeroom" (couldn’t make this shit up if I tried). She’s so close to bursting he has to literally carry her to the school bathroom. He initially mistakes her for a lost child, but she turns out to be a senior at his school… and a potential love interest…

The second potential target for Jun’s affections is his teacher, Sayako. She’s only 18, which to the VN’s credit it at least tries to explain away. There’s a slight bump in Jun’s road to seducing his homeroom teacher — she’s already dating another student. It’s the world’s worst kept secret; a classmate (Miko) spontaneously tells Jun he’s dating the teacher. Sayako isn’t doing any better: she drags Jun off to the teachers’ lounge on his second day to interrogate him about her boyfriend and why Miko could be feeling sad. Well, aside from the recent car accident in which both of Miko’s parents died. He kind of became a loner for a few days after that, but he seems over it now. The creepy part is she and Miko only started dating after the accident and only because she felt sorry for him. What a horrific travesty of a relationship.

There are three main branches. The first is one where you help bring Miko and Sayako together, despite neither caring very much about the other prior to Jun’s meddling. The second route lets you date the mentally challenged girl with the child-like physique. Your final option is to have Jun steal Miko’s girlfriend away and date the teacher himself. Choices often have unexpected results, and quite a few combinations arbitrarily lead to a bad end. Jun also has a strange medical condition where studying in the evening makes it impossible for him to get up in time for school.

Most of what happens is fascinatingly weird and somewhat illogical. The writing itself reads like a little kid shouting at you in broken English, with a side dish of RANDOM CAPITALIZATION. Jun’s goal of proving his maturity seems to be forgotten almost immediately as he gets caught up in a crappy high school romance VN. In the end, dating the retarded kid or his teacher apparently count as being mature — SWEET.

The default text speed is set to 1 character per second. It’s a good indication no-one bothered to test this shitty VN prior to throwing it online.

After recently reading a couple 1280×720 (and higher res) VNs, going back to 640×480 is like getting smacked in the dick with a particularly solid cactus. Backgrounds are ripped from Crescendo (should’ve ripped off a better looking VN). Sprites are from BASSnovel, and I was under the impression those were free for use within BASSnovel only. They’re single pose sprites, so Sayako gets to have her hand glued to her head the entire time.

What wonderful use of 256-color sprites with 1-bit transparency. I can really appreciate the dithering and aliased outlines. Graphically, it’s only a decade or two behind the curve, looking more like 1993 than 2013. The sprites, mangled as they are, seem too small for even 640×480 and the textbox nearly swallows Sayako whole.

Music is the one thing I didn’t really have a problem with. The few tracks used are all creative commons music, but the different artists aren’t properly credited, thus breaking the terms of the license. Good job. 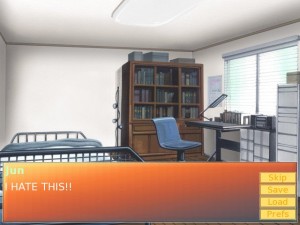