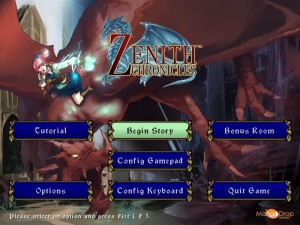 Let’s just first get this out of the way: this is not a VN, not even partly. It’s a side scrolling shmup with an excuse plot. All text is dialogue, no narration at all. To call Zenith Chronicles a VN would stretch the definition of the term to also include every RPG ever made.

Zenith Chronicles follows the story of Dain and Alija, two amnesiac mercenaries who make a living vanquishing unwanted critters and minor demons for cash. Alija is a low-tier magic user, Dain can shapeshift into a dragon (for some reason, no-one really seems to care how/why). They’re kind of shitty mercenaries actually, taking dangerous jobs without an advance and such. Not that it really matters, they’re single-handedly fighting off entire armies of demons by the end of the first act.

After a battle early on, they somewhat literally fall into the plot, crash landing near female mage Lyssa. She’s searching for a recently spotted changeling child (never shown on screen), to protect him from evil doers. In the world of Zenith Chronicles, changelings can be sacrificed as a one-time super-duper magic booster. This whole changeling business leads into a lengthy fetch/escort quest, during which the demon army decides to invade (or rather continue invading) the human realm. As you’d expect from a video game plot, Dain has to personally save the day and defeat the demon lord.

However, that’s only when you roleplay Dain as a reasonable person. Early on, you get ‘difficult’ moral choices like "save the humans"/"kill all humans". Dain is eventually seduced to the dark side, but that’s not until some time later. Starting off as a genocidal asshole seems rather inconsistent with his established personality. Interestingly, going into the evil route doesn’t really make Dain more evil (admittedly, that would be rather difficult). Instead it just makes him sexist and a gigantic douche towards Alija.

The game has three major routes, the first two being the aforementioned good/evil routes. Clearing both of those unlocks the final ‘true end’ route. Each route has multiple endings, but they’re rather tedious to get. Not because they’re hard to find — the game basically tells you what to do, but the lack of a manual save feature forces you to turbo through the entire game over and over again.

This repetition actually ties into the story — there’s an in-universe reason you keep looping back to the beginning. It seems promising, but the payoff is a kind of a let down. After collecting enough magical trinkets through multiple time loops, Dain accidentally opens up a portal to the hidden dragon dimension. Alija is really a dragon goddess and being in the dragon dimension causes her to recover her powers, somehow destroying the entire dimension in the process. Neither her, nor Dain’s evil clone (long story) listen to reason until Dain pummels them into submission. It’s all rather silly and at times extremely far-fetched.

The good endings feel a little out of place, cutting out a thick slice of fanservice with some cheesecake endings CGs showing off the female cast in partial state of undress. Swell that Dain’s getting laid, but there isn’t much build-up to it — especially when two minutes earlier his sole focus was saving the world by vanquishing an evil army.

Side-scrolling shooter missions form the primary gameplay. They’re rather dull, especially the ones during the first half of the game. The levels seem long for a shooter, and they’re very low on enemies; multi-second sequences without any opposition are frustratingly common. Most missions are rather easy, but there’s a sudden difficulty spike near the end of the final route. At least you can turn it down to easy mode at any time.

Gameplay can be frustrating due to some odd design decisions. There’s an invisible wall at the bottom of the screen, making it very hard to shoot ground based enemies. Another invisible wall limits your movement to the left half of the screen which can get annoying during some of the later levels. Projectiles often have colors that blend into the background and some of them (especially arrows) are extremely tiny. While you do have a health bar, the lack of invincibility frames after getting hit makes it very easy to lose 80% of your health in a fraction of a second.

Fuck your shit, I’m a dragon.

You can skip missions after you’ve cleared them once, making repeated playthroughs a lot more bearable. Annoyingly, the way you play some missions matter to the story, forcing you to replay them when aiming for a new branch. Zenith Chronicles isn’t a VN, and a lot of standard VN features are missing (save slots, text log, auto read, etc). It does have a skip key but that one doesn’t accelerate/skip any of the graphical effects, greatly reducing its effectiveness.

Sprites don’t seem to have any alternate poses, but costume changes and minor expression changes are occasionally used. The thing which stands out most about the sprite work is the way some characters (Dain especially) appear to tilt back into the screen. It looks really odd, and the tilt isn’t consistent between characters. Alija’s goofy unfocused stare makes it look like there’s something wrong with her. Some of the clothing choices seem incongruent with the fantasy setting. Lyssa especially looks like she dropped in from the sci-fi game they were filming next door. The game also seems curiously fond of stripping characters down to their (modern) underwear.

They’re supposed to be wounded here.

The backgrounds aren’t terribly exciting, but they’re usually covered up by the large number of sprites on-screen at the same time. The event CG are rather nicely done; classic fantasy artwork. Sound effects aren’t great and the lack of a bullet impact sound is a frustrating omission. Background music isn’t anything special. Some story scenes have rather long stretches of near silence.

Parallax scrolling during the shooter segments doesn’t prevent the scenery from looking a little flat. The tiny enemy/projectile sprites aren’t particularly impressive either and their microscopic size makes it hard to play in windowed mode. A crippled fullscreen mode (requires a restart) makes it frustrating to switch. Otherwise, the user interface feels solid and professional. The lack of a consistent back button in sub screens causes some occasional confusion.

It’s definitely a shooting game with story segments, not the other way around. The cliché ridden plot works better if you try not to think too hard about it and the morality system feels poorly handled. Gameplay is mediocre — slow paced, unexciting and at times feeling unfair.