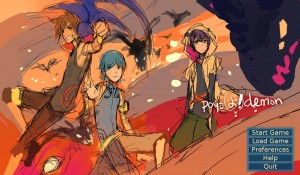 I’m not usually a fan of having a nameable protagonist in a standard VN — it’s such a pointless thing to add. The protagonist of Poyo Yo! is a cross-dressing girl who hides her true gender for reasons unexplained. Naturally, you’re asked to name her before you learn about the whole cross-dressing business. Yuu (no default name given, but leaving it blank changes her name to Yuu) tells us that demons are hiding amongst regular people. She follows it up with something vague about demons having vicious souls, no wait they don’t have any souls, no wait that’s a "rhetological" (pretty sure that’s not an actual word) fallacy. Anyway, she’s currently fighting some demons. How did she end up in that predicament? It all happened a long time ago…

Back to the rest of the VN with an oblivious Yuu on her first day of work for a renewable energy company. They hoist her into some overalls and send her off with a team to inspect some windmills. These windmills turn out to be the historical grain-milling type… WTF. Her colleagues, one of whom she suspects might also be a girl pretending to be a boy (wat?), don’t seem to care much about doing their supposed job. At this point, we pretty much know there’s going to be a fight with some demons. No need to stall so damned much — it’s not tense, it’s tedious. After some padding, her colleagues reveal themselves to have magical powers and they fight some demons in a not terribly exciting fight scene (Yuu is just an onlooker, keeps missing things and doesn’t understand the rest). Perhaps more importantly: what the fuck is going on? Why is a renewable energy company in the business of demon extermination? Why did they bring a random civilian with them to fight demons? Yuu also has magic potential (of course), but they didn’t know that! She’s slightly annoyed her job will be more tiresome than she hoped. The End.

None of it makes any sense.

Aside from a few sprites and the stock music, pretty much everything else in this VN is unfinished. Poyo Yo! has lots of backgrounds and event CG, but does it really matter if they’re all just unfinished sketches? Even the script is unfinished — a number of decision points have only one branch implemented; the other option basically just says ‘nope’ and puts you back at the choice. It also uses the standard Ren’Py GUI, not even bothering to change the default textbox. 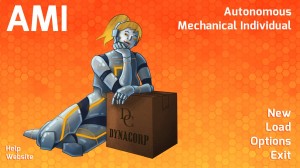 IN THE FUTURE, personal robot servants are totally a thing. They’ve become so cheap even a poor college student like Richard (nameable, but leaving it blank changes his name to Richard) can afford one now. When his shiny new AMI unit finally arrives, she almost immediately malfunctions and becomes sentient. Her human-like behavior is a clear contrast to the 50’s pulp sci-fi stereotypes every other robot seems to be suffering from. The way robots work in this is about as plausible as The Jetsons, best to treat the science as magic and move on. AMI makes some generic robot-like observations and nearly kills herself by doing something stupid (sentient, but not quite intelligent). In the end, AMI is revealed to be a remotely operated puppet, controlled by one of Richard’s classmates. She apparently had a crush on Richard and controlled the robot through a Kinect-like interface. Again, the technical explanation makes no sense. Girl in a robot suit (Scooby Doo style) would’ve actually been more believable. The story hangs around in slice-of-life land for too long and the twist ending isn’t particularly interesting.

AMI uses a lot of dry exposition dumps between scenes. Furthermore, characters are constantly stating things that are obvious to them, going so far as to outright state their relationships. It can be painfully unsubtle. The story has multiple endings in name, but the differences don’t amount to more than a few lines of text at the end. Character designs are outright ghastly, both humans and robots. Ugly faces, weird texturing, and why does AMI have hair? Several sprites have a 3 frame, 2 fps light glowing animation. Seeing as I’m not playing this on Super Nintendo — what’s the deal with the choppy frame rate? A weirdly low horizon position on some of the backgrounds give the sensation of tilting backwards. 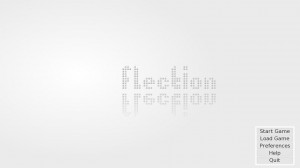 "You" are dying from a car accident when a demoness shows up and offers you another chance at life. Not bothering to wait for your reply, she tells you to first prove your worth by assisting her in fighting some ‘aberrations’ across different realms, occupying the minds of others as an observer. It’s a flimsy excuse to cram four unrelated stories into a single VN. The stories themselves mistake exposition dumps for actual story content, spending the majority of their duration building up a world, and then never really doing anything with it. Even more of a crotch punch is how they end — the protagonists have a penchant for sudden, far-fetched deaths. The overarching plot seems little more than an excuse and the ‘theme’ it tries to push so hard doesn’t quite exist. It even forces you to type in a magic word before letting you continue (tip: just read the source code for the answer).

Visually, there isn’t much to see — bland photo backgrounds and bad to mediocre sprites. The screen-filling textbox never fades away to show sprite changes, acting more like an oversized ADV textbox than a NVL-style one. It also refuses to show an entire paragraph of text at once, forcing you to click separately for each sentence. It’s annoying, fucks with rollback (which only displays the first line of each screen) and causes visually jarring text reflow. I also found it an odd choice to use 3rd person sprites for a story so specifically concerned with viewing events through the eyes of others. Sprites slide around the screen a lot and due to the strange decision to show them shin-up rather than waist up. It makes the characters look like statues riding around on motorized skateboards. The animated fight scenes, while ambitious, end up looking like some puppets bashing together aimlessly.

Oh, and pressing ‘S’ at any time crashes the VN. 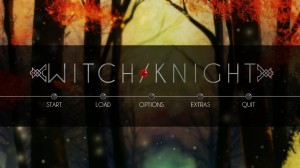 Bethlyn, a female knight, travels to the temple of Huǒji to request a resurrection of her dead girlfriend: a half-goblin witch named Elisa. Luckily, Huǒji is the type of whimsical god often found in stories and agrees to bring Elisa back to life if Bethlyn can prove her worth by completing seven arbitrary trials. Beth is assisted by Xiǎoniǎo, a somewhat suspicious former servant of Huǒji. As you may have noticed, Witch/Knight uses quite a lot of Chinese names and terms. Not a problem per se, but it kind of assumes the reader knows what they mean. None of it is plot-critical, but sitting through a bunch of in-jokes you can’t understand (because they’re in fucking Chinese) is still pretty annoying.

The seven trials are fairly straightforward: riddles, fetch quests, etc. Not all of them are winners, but there’s at least enough variety to keep things from getting boring. Each trial is treated as a minigame, complete with a success/failure screen afterwards (breaking story immersion by explicitly treating itself as a game). Occasionally the result popups come a little early: when from a story perspective things aren’t 100% certain yet. Another thing which uses immersion as a punching bag is the constant stream of anachronisms (I hate anachronisms). Characterization suffers from excessive snark in the dialogue, making everyone sound kind of alike. There’s a serious conflict of tone between the various elements of Witch/Knight. The ‘sarcasm tennis’-style dialogue is lots of fun, and makes the VN worth reading by itself. Unfortunately it also sucks the seriousness out of everything else, pulling the emotional foundation out from under the already weak dramatic parts.

The non-silly parts don’t really hold up. Elisa was burned at the stake for being an evil witch. Not surprising, since she evaporated the town’s water supply (it was cursed or something) — how on earth did she think people would react?! And how did she get captured by a few angry peasants if she’s such a powerful witch? As Elisa was starting to get slightly crispy, Bethlyn used a soul switching gem on her, so our main character ‘Bethlyn’ is actually Elisa. Strange how she acts almost exactly like Bethlyn as shown in flashbacks, and not at all like Elisa (her skills match Elisa, but not her personality). Her blue eyes are also touted as some sort of hint that Bethlyn wasn’t who she seemed, but a strange eye color doesn’t exactly stand out between green goblin witches and eyeless demigods. Of course, another problem is that the soul switching gem needs to be a "soul and eye color" switching gem for any of it to make sense. As far as foreshadowing goes, Witch/Knight is pretty weak — it just keeps pulling new things out of nowhere. For example in the sixth trial, Xiǎoniǎo suddenly reveals himself to have inter-dimensional mind reading powers which he uses to outright tell you the answer to an impossible-to-guess-otherwise nonsensical riddle.

I rather liked the backgrounds, but I wish I could actually see them and not just the giant textbox overlapping the lower third of the screen. It covers nearly the entire ground portion of each background. Scripting is pretty lazy; sprite/background changes rarely use any kind of transition. Witch Knight also has some event CG which serve as a reward for getting each ending. The extras screen isn’t much of a reward, primarily because it doesn’t exist — the button on the title screen is a lie. Small usability problems are an annoyance in an otherwise polished GUI: missing feedback for hover/disabled buttons, being unable to open the load screen during a choice, etc. 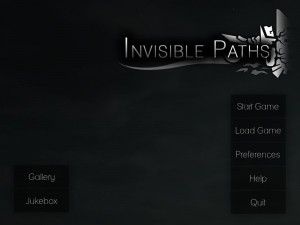 A young woman dies in a freak motorcycle accident. She’s so laughably negligent it’s hard to feel sorry for her — she was driving a poorly maintained bike, with one hand, at high speed, through the night, in the rain, and on a back road. Just as her bike started making its final death throes (her brakes died), she saw something in the middle of the road. Rather than risk a collision, she guarantees one by making a sharp turn into the nearest brick wall. This kills the girl. In a stroke of further implausibly bad luck, her short-lives transition into wall-splatter further involves a 14 year-old boy who just so happened to be walking exactly at her point of impact.

With the main character dead, which direction the story will take is always a surprise. My body wasn’t ready for what followed… She dryly summarizes her experience of dying… and then making a deal with a demon to come back to earth as a ghost. Interestingly, despite apparently selling her soul to the devil, she doesn’t really have any particular motivation to come back. Depending on a whim of the moment, she either stalks her ex-boyfriend or aimlessly wanders the streets. The boyfriend route just has her trying to cheer him up, ending without resolving anything about the accident. Aimless wandering is more effective — she meets the boy she killed. He’s a ghost too, so I guess demonic deals are a popular thing in their town. The part where they sold their soul to the devil apparently isn’t important, because it’s never spoken of again. The boy’s route ends in an extremely obvious moral parallel to the traffic accident, made possible by magical ghostly future sight (pulled out of the nearest ass). Both routes are 90% casual banter and philosophizing about things very much unrelated to demonic deals and motorcycle accidents. You want it to get to the parts that matter, but it never does.

Overall, the backgrounds are kind of shitty. Sprites aren’t anything special either, and I’m personally not too fond of the super angular line work. Nothing about the visuals is particularly noteworthy — it’s all rather dull.