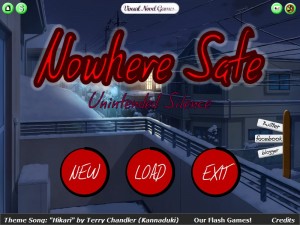 genre drama
creator Red Panda Games
website http://visualnovelgames.com/Nowhere-Safe2.html
summary It has been several years and Kimiko now not only has to handle her own issues, but also those of her daughter.

You may want to read my Nowhere Safe 1 review first.

Kento is kind of a dick sometimes.

Last time on Nowhere Safe — Kimiko is being stalked by a crazy hooded man who was wrongfully released from prison. His sister, Kimiko’s therapist, stole her mail and committed perjury in order to get the robed lunatic out of a life sentence. The VN ends just as crazy dude throws a small rock through a decorative glass pane in Kimiko’s front door.

The sequel appears to continue at the exact point we left off last time, but (surprise!) it’s only a dream sequence and the rest of the VN takes place years later. In her nightmare at least, captain loon shatters her solid wooden door into glass shards and just walks right on in. I’m assuming that’s not actually what happened in reality, but it indicates he somehow got in by force. How the fuck did he manage that? The rest of what happened is kept for some quarter-assed attempt at a plot twist later.

Back in the real world, seven years have passed and Kimiko is still living together with Kento. She has reverted back to being a shut-in after receiving a large monetary settlement… yet again. Not from her crazy therapist whose criminal acts enabled the traumatic event leading to her regression. No, the money is from the police for their supposed incompetence. Adding to the hilarity, Kimiko didn’t even fire her therapist after all that happened. She didn’t want to change therapists again. WTF?!

Not a disguise, Kento’s gay twin is a real person.

The focus this time lies less on Kimiko and more on her spawn. She has a daughter now: Kazumi. It’s the little girl’s first day at school when they discover she refuses to speak around anyone outside her direct family. That might’ve been discovered earlier, but her parents never sent her to kindergarten, nor did they ever make any attempt to let her socialize with other kids her age… whoops. Within the first week of school, Kimiko gets a call from the teacher implying Kazumi used ESP to knock a kid off the slide, somehow cut another one with safety scissors and gave several others diarrhea. WTF?!

Besides the new madness are several returning characters. Kimiko’s only friend Aya shows up briefly to announce her (temporary) emigration to Australia. Unable to serve her role as Kimiko’s handmaiden, she sends a replacement — Kento’s never-before-mentioned identical gay twin Naoki. Now you might think it’s obviously just Kento wearing a disguise, but nope, Kento really does have a twin brother who also just so happens to be friends with Aya. The twins don’t exactly get along. One reason is Kento got beat up a lot in school, being mistaken for his outwardly gay brother. Naoki apparently also sort of tried to rape him at one point. WTF?!

The first Nowhere Safe had choices, but only one ending. The sequel does have different endings, they just don’t follow logically from the choices made. Only a tiny fraction of the choices seem to matter — you can choose to do horrible things to Kazumi, but none of it seems to matter aside from a single choice near the very end. Don’t keep your hopes up for a good ending either. Every single one ends in misery, insanity and/or death. Even when things seem to be going well, the epilogue just bends it back to a massive failure.

The one point where Nowhere Safe 2 really goes for the full 1.21 jiggaWHATs is the final reveal of what happened all those years ago when señor stalker forced himself into Kimiko’s apartment. Crazy robe guy got through the front door somehow and raped her. She got pregnant. Crazy guy’s mental illness is hereditary. Kimiko decides to have her rapist’s child regardless. Kimiko is fool. Kento randomly comes over in the middle of the night, knocking robe guy on the head with a bottle of champagne, killing him. That would’ve been useful information to know going in.

The first Nowhere Safe had unlikeable characters and dubious plot developments. In retrospect, at least it didn’t gleefully torture its characters. Adding a kid into the mix makes everything even more unpleasant.

Call me old fashioned, but I think a 60MB flash file is too big to reasonably embed in a web page. For comparison, the first Nowhere Safe was ‘only’ 34MB and already took a million years to load.

No animated transitions aside from sprites skateboarding in/out of scenes. The sprites are the same as the first Nowhere Safe and still not that great. Some new backgrounds have been added, but since Kimiko is still a shut-in living in the same house there’s not a whole lot of room for variety. The laughably inappropriate font makes a triumphant comeback.

You’re still forced to occasionally click on the front door to open it, but at least there’s no random dressup minigame this time. A save feature has been added, but it’s limited to a measly 3 slots and you can only load from the title screen. The new skip mode works reasonably well, but the accompanying rollback function is crap. You can’t roll back through scene changes and it annoyingly also doesn’t work during choices. One other feature I’m still sorely missing: where the fuck is my keyboard control?!

Nowhere Safe from how awful this VN is.