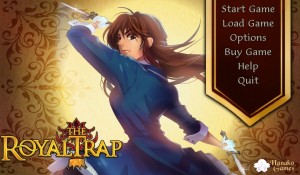 genre mystery, otome
creator Hanako Games
website http://www.hanakogames.com/royaltrap.shtml
summary Madeleine has to get her prince out of trouble when he's accused of kidnapping a princess.

Prince Oscar and his personal assistant Madeleine have traveled to the neighboring kingdom of Gwellinor to attend crown princess Cassidy’s coming of age party. A marriage between Oscar and Cassidy would benefit his kingdom, but fellow princes Gaston and Nazagi are also vying for the hand of the princess. Everything goes horribly wrong for Oscar when Cassidy is kidnapped from the garden and he’s the prime suspect. It’s up to Madeleine to clear her master’s name.

Maddie goes into full-on spy mode. Accompanied by Mission: Impossible sound-alike music and special climbing gloves, she sneaks through the castle in search of clues. Her investigation is quickly interrupted when prince Oscar is captured by an armed thug. This turn of events gives Maddie the opportunity to add knife-wielding badass to her growing list of capabilities. For some strange reason, she takes forever to realize the thug in question is Cassidy’s brother, prince Callum (and yes, they’ve met before). He forces Maddie and Oscar at knife point to accompany him when he goes to meet Cassidy’s kidnapper with the ransom.

Surprisingly, the kidnapping subplot is resolved entirely by the end of the common route. Hints that Cassidy may not be the legitimate crown princess are brought up (for about the third time), this time so painfully obvious that Madeleine couldn’t possibly not realize the truth. Or so you’d think… She gets distracted by something and basically forgets to solve the mystery until the final chapter. When a random soldier tries to assassinate Cassidy, Maddie’s party fights him off but then they all forget to tell anyone about it. What makes that even more ludicrous is that Madeleine is framed for the kidnapping and and she still never mentions the assassin. The lack of choice at this point in the story is very frustrating, you’re forced to passively watch Maddie confess to a crime she didn’t commit which lands her in the castle’s dungeon.

Cassidy’s ‘secret’ is technically a spoiler, but if you haven’t figured it out by the end of the first chapter you really haven’t been paying attention. Cassidy is in fact Callum’s thought-to-be-dead brother, Caspian. It’s not exactly hard to figure out with how heavily it’s hinted at during various points in the story. And y’know, it’s in the fucking title and all. The Royal Trap sets itself up as a mystery, but then solves itself trivially by the midpoint. The only thing keeping the story alive is a sudden attack of mass stupidity.

Going into Callum’s route feels like the most natural progression after the events in the common route. Maddie allies with Callum to prove her innocence and find out the truth about Cassidy. After a point, what started out as reluctant allies spontaneously transmutes into romance. It lacks buildup and I guess threatening to kill Oscar earlier doesn’t have any repercussions whatsoever.

Oscar’s route is much like Callum’s only with a different romantic partner for Maddie. It doesn’t have the same ‘suddenly romance’ problem Callum has; Oscar is put forward as the primary love interest from the very beginning. One major event is different in Oscar’s route: a group of angry peasants with sticks overruns the castle. No, that doesn’t make any sense.

Gaston is pretty much the joke character. His route is like a dumping ground for lighthearted wacky hijinks. It’s an amusing diversion, even if it doesn’t exactly fit with the tone of everything else. Gaston himself isn’t even a romanceable character, Maddie just helps him and Cassidy get together. Oscar is forgotten about entirely while Maddie switches allegiance to Gaston and gays it up with his maid.

Callum and Oscar are two variants of the main storyline, Gaston is the joke route, but then what is Nazagi? The otome and mystery parts in The Royal Trap don’t mix very well and Nazagi is one of the worst offenders. He fills out the glasses-wearing scheming bishounen slot for the otome aspect, but serves basically no role at all in the actual story.

There are two Dolores endings, even if she doesn’t have a route of her own. Not much to it beyond a few screens of text that can be summarized as "screw you guys, I’m going to work on a farm" followed by an ending CG.

At the beginning of each route, the main mystery is already solved (for the reader at least) and Maddie has been jailed for Cassidy’s kidnapping. Getting her out of the dungeon takes a while and even then she’s usually limited in her movements for a good while afterwards. It wouldn’t be so bad if it one route were like that, but as a starting point for every single route it gets rather painful. The relatively sluggish skip mode isn’t doing any favors here either — grinding through the common route takes a while. Nazagi and Gaston play no role in the main plot unless you actively force them into it, otherwise they barely even come up after their initial introductions. Oscar is largely forgotten about in any routes other than his own.

After Maddie gets out of the dungeon, she still has to figure out why she was framed in the first place. While she learns some new things over the course of each path, the main issues keep getting resolved not by deduction, but rather by finally remembering something from the common route and acting upon it — incredibly unsatisfying. On the other hand, a bunch of crazy shit keeps happening which is entertaining in a soap opera kind of way.

Some facial expressions can get a bit weird.

I’m not crazy about the sprites. Some are pretty decent, some are extraordinarily ugly. The coloring style seems inconsistent, especially the way hair is shaded. Sprites don’t have any pose changes either (always disappointing to see in a commercial release) and some of the default (only) poses are rather awkward to be stuck with for the entire VN. Any problems I have with the sprites however feel completely insignificant compared to how much I hate the backgrounds — they’re horrible. Shitty, unshaded perspective incorrect textures are slapped on everything. It’s like really bad 3D, except even the perspective is fucked up.

A good argument to omit side images on an event CG.

It’s not all bad though. The Royal Trap also has a bunch of event CG, good ones even. They’re easily the best part of the presentation, but even frequent event images can’t compensate for the otherwise poor visuals. Some half-assed attempts at visual effects are made during fight scenes and a few other occasions. Fight scenes just show a static sprite on a black background and the running animation is like having a seizure. The in-engine opening movie is dull, consisting of little more than just a series of character introductions. I also hate the song. The rest of the soundtrack is heavily guitar based and lacking somewhat in variety.

Much of the user interface is just a reskin of the Ren’Py default. The textbox at least is significantly different although I don’t quite understand why it has to be so tall and narrow. There’s plenty of spare horizontal space even with the gigantic side image on the left. Seeing as the entire point of having a side image is to place the speaking character’s face closer to the textbox, I find it odd that it’s such a long distance away to the left.

The promised political intrigue falls apart entirely and eventually relies on both stupidity and magic to work. As a story, it’s still entertaining, but highly flawed. The length (6-8 hours) is fine, though still quite a bit of that consists of padding/skipping/duplicate scenes. At €20 I expect the main presentation to be not shit, instead of seemingly blowing the entire budget on event CG.

8 thoughts on “[review] The Royal Trap”