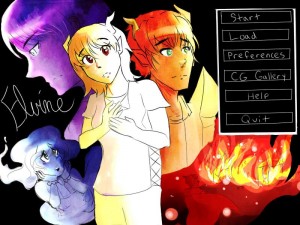 A long, long time ago humans and dragonkin lived in neighboring countries. One day, the dragon lord leading the dragonkin and the warrior king of the human realm became best buds. Some god even supposedly blessed their friendship (don’t worry, this will make less sense later). The dragon lord, being a swell guy, taught the humans some magic but then became gravely ill. After a prolonged absence he returned to court and slaughtered his good friend the warrior king. For some reason, no-one really questioned why the dragon lord suddenly went insane. The humans responded somewhat poorly to their king getting murdered and started a century-long genocide that has lasted to the current day. The dragonkin mostly just let themselves be killed without really fighting back, based on some bizarre sense that their god is angry at their entire race because the ‘holy friendship’ was betrayed. Where do they keep getting these weird ideas of the opinions of some unseen god?

This intro sets the stage for the rest of the VN. Elvine is a dragonkin girl of tender age who finds herself in the middle of a vicious battle when humans attack her village. She manages to flee unscathed, together with her father and random dragonkin soldier/love interest Lukas. The three of them escape to a nearby abandoned castle. Once there, Elvine learns theirs was the last dragonkin village and the three of them most likely the last dragonkin alive.

With nothing better to do and unable to go outside in fear of being discovered, Elvine is left to wander the castle and hang out with either Lukas or the two castle ghosts, Mary and Bryant. Mary hangs out in the library and primarily functions as comic relief. The way she keeps scaring Lukas completely shitless with no real effort is pretty funny. The other ghost, Bryant, is the ghost of a murdered prince and the second love interest. In general, the characters are fun and their interactions stay entertaining all the way through.

Stuck in a castle with nothing to do doesn’t make for a great story, but something new to do is quickly discovered based on which of the two love interests you hung out with most. Both paths eventually lead to Elvine discovering something which makes the ‘legend’ from the intro make slightly more sense (not a whole lot more, but it’s a definite improvement). While the route split is early enough to prevent boredom, it’s accompanied by Elvine’s view of either Bryant or Lukas making a sudden jump from casual acquaintance to ‘in love’.

Aside from the handwaving required to make the whole dragon lord business work, my biggest complaint is how passage of time is handled. The thirty-day food supply announced early on triggered traumatic flashbacks of terrible dating sims. The writing itself also regularly feels stuck in a day-to-day dating sim mold, with many of the early choices being a repeated ‘what to do today’ decision. Too much structure makes things feel mechanical.

Both routes eventually turn into a small mystery for Elvine to solve, related to the legend of the intro. The main problem there is despite her discoveries filling in some very big holes, how anyone would ever believe the unamended version is left as an exercise to the reader. One epilogue is a potent guffaw generator — Elvine hides in the forest for a few years, everyone forgets about the hundred years of dragon genocide and she’s welcomed into human society as a godlike sage.

Backgrounds are drawn a rough line-art on top of filtered photos. It’s an interesting technique that I don’t think I’ve ever seen before. Not very pretty, but it leads to surprisingly functional backgrounds for little effort. Similar to filtered photos, but trading appearance for flexibility.

The sprites aren’t great and don’t have any secondary poses. Lukas has really distracting chimney arms that look bolted onto the sides of his torso — they even have a little tower on top. Compensating for the lack of sprite poses is a giant pile of fullscreen CGs and smaller cut-in images. Most of ’em are pretty rough, but they add a layer of emotional depth to the character art.

The GUI is mostly stock Ren’Py with a different paint job. The main text font is just small enough to become annoyingly blurry when upscaled to full screen.

Aside from some hard to swallow events in the very beginning and end, Elvine is a perfectly serviceable fantasy/otome VN with fun characters and a sense of humor.