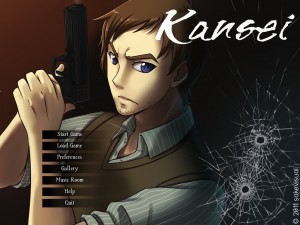 It’s the day after the events of Jisei. Things start off well by giving the main character a (nick)name: Kangai. He could’ve just made up a fake name for himself last game, but whatever. Anyway, he’s made to either stay with Naoki and his twin sister Aki, or remain in police custody… for some reason. It’s implied he’s a key witness to Jisei’s murder, but there’s hard physical evidence, the murderer spontaneously confessed and a police officer witnessed all of it. What do they even need him for? Apparently lawyers are some kind of magical doubt-seeding leprechauns with unlimited potential and only Kangai’s testimony stands in their way. Sounds like a bunch of bullshit, but the intent is clear: the plot requires Kangai to stick close to Aki and Naoki.

He travels with Aki’s band of merry men to their employer: Mr. Auten, founder of Auten engineering. She seems to know a little about their special powers which she calls Kansei. I’m not really a fan of how these powers are integrated into the detective storyline. Kangai can sense death and relive the final moments of a recently deceased person, but the time limit for his sensing changes between 5 and 30 minutes depending on what’s necessitated by the plot. Aki’s powers are similarly inconsistent. In Jisei she was capable of telepathy, but that gets revised to telepathy on people with a Kansei and inception on normal people. Naoki still exists (and having a photographic memory is still sucky for a super power). Rounding out their party is Li Mei, a strange young girl who’s pretty much River from Firefly. I hope she gets a more distinct personality and back story in future installments.

Police officer Gurski turns out to be a recurring character. Apparently he’s the parole officer (more like babysitter) of Aki’s group of mutants. He also knows about Kangai’s secret child detective past. This new information makes Jisei make more sense and less sense at the same time. It’s also still weird how the story is told from Kangai’s perspective, and he’s hiding information about his past basically from his own thoughts (the reader).

When the group arrives at Auten’s country mansion, the (famously paranoid) old man goes into a panic after seeing Kangai and locks himself in his office. Everyone wanders off, waiting for the old man to calm down. Some time later, Kangai suddenly senses death. With assistance from the staff, they manage to open the office door only to find Auten’s lifeless body — another closed room murder. Well, not entirely closed room. Security guy Kevin has a master code capable of silently unlocking every door in the building including Auten’s super-protected office door. Spoiler: Kevin obviously did it. He was also kind enough to leave the poison in the trash instead of just flushing it down the sewer.

Kansei has two routes, but the difference between the two is minor. Everything could’ve easily been integrated into a single route. Replaying is kind of tedious due to the way all the dialogue is split between menu options and different characters in different rooms. It really makes skip mode far less effective. You don’t get the epilogue for the true route until you’ve completed the other route, so it’s possible to have to go through the entire thing at least thrice to see the real ending.

The ending itself isn’t very satisfying. You do find Auten’s murderer, but I was never really emotionally invested in that. Auten himself is never shown on screen and all you know of him is that he’s a paranoid asshole. The solution to the closed room murder is also disappointingly dumb and the ‘true end’ epilogue is just a sequel hook. Maybe in the next game we’ll finally get to the main plot of the series.

Kansei isn’t nearly as limited as its predecessor, it has more characters and less padding. Despite still being very short (~90 min. to get all endings) and taking place inside a single building, at least something happens and the building is much larger. The murder mystery was actually the weakest part and the inconsistent/overpowered special abilities are worrying.

The gameplay consists mostly of walking around the house and talking to various people. You’re often given a choice of conversation subjects, but most of the time you’re forced to eventually pick all of them in order to move the plot forward. Not having to listen to Gurski constantly regurgitate things you already know helps with the pacing. There’s also way more of a puzzle aspect compared to Jisei. Well ok, one puzzle, but it’s a perfectly decent one.

The sprites only have arm pose changes, but due to the decent sized cast and short length the graphics don’t have the time to grow stale. Compared to Jisei there’s also a lot more variety in backgrounds (again, bigger building). Background quality is down a lot though — most backgrounds are just ugly textures slapped on basic line-art. There are a lot of blurry parts and stuff copy pasted (poorly) from photos.

Sprites have a blink animation and it’s creepy as fuck (as is often the case). When you play Jisei and Kansei back to back, the difference in tone of the background music really stands out. Jisei tried to be somewhat eerie, but Kansei has a much more lighthearted soundtrack. The voice acting is still surprisingly decent for a micro-budget indie game.

A clear step up from Jisei, but the murder mystery is still lackluster and the overarching plot is taking a long time to finally get going.