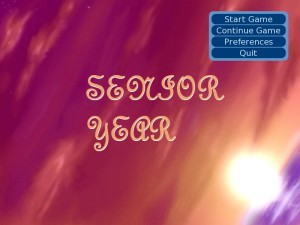 genre drama
creator NaweGR Games
website http://lemmasoft.renai.us/forums/viewtopic.php?f=11&t=1598
summary 'You' are in your final year of college and now every woman you meet wants to fuck you.

When you look at the vndb page for Senior Year, you see an interesting release history — it has been re-released under a different name twice. The most recent version, Alta, Texas even jumped up from freeware to a $10 commercial release. I was intrigued by the prospect of a 2006 freeware VN being good enough (albeit with some added polish) to still hold up well enough to justify a non-free remake. I went back to the root and started with the 2006 original: Senior Year.

‘You’ are going into your final year of college. Your college days up until that point consisted primarily of being a boring sack of shit. Regardless (and faceless), the main character has a fully established personality and backstory… but he’s still supposed to be ‘you’. I personally find it much easier to empathize with a normal character than retard puppet pseudo me, but maybe that’s just me.

The VN itself follows the standard pretty girl harem setup. Our boring dweeb of a main character goes about his daily life surrounded solely by dateable women. Despite the guy not exactly being hunkmeister 3000, every girl is instantly attracted to him for some reason. While the setup is bog standard, the story quickly drifts far, far away from the typical pure love stories commonly seen in VNs of this type. The contrast gets to the point where it becomes almost comical. Rather than angelic pure maidens, the girls in Senior Year are more of the “can suck a golf ball through a garden hose” variety.

Is she blushing? Tired? Punched in the face?

Having one or two romance options be, let’s say… “excessively outgoing” is of course no problem at all. When it’s five out of five, that’s a bit much. There’s a childhood friend character who’s at least somewhat more modest and reserved… until you enter her route and this happens. The author seems to have one specific ‘type’ he wants all these women to conform to. Perhaps the most obvious example of that is a strange anti-marriage sentiment shared amongst the entire female cast. In general, the WTF/minute ratio is quite high with gems such as: “I’m on the pill so I don’t have to prove it was rape before being allowed an abortion.” How romantic.

The excessively terse script leaves no room for emotional buildup. And instead of romance, there’s just a bunch of meaningless sex. Or at least, I assume it was sex. Maybe the girls were in fact praising MC’s proficiency at fading to black which is what most (but strangely not all) sex scenes seem to be replaced by. Senior Year goes through the motions, but mostly has the writing and emotional depth of a sex romp game — without the sex. People who prefer heavily romanticized notions of true love may spontaneously burst into flames upon reading.

It’s old, it’s free, it’s stock art everywhere. Texas sure looks a lot like Japan and the university like a generic Japanese high school. The American setting was supposed to be one of the strong points, so having the visuals look like generic bishoujo game #8237 is a letdown. Sprites are amateurish, but functional. Attempts to draw characters blushing tends to look more like a horrific facial rash and it spoils emotional scenes.

Erm, thanks… I guess.

Background music is minimalist and extremely quiet, but there’s voice acting to make up for it. Every character has some sort of accent, but I don’t feel remotely qualified to discuss whether or not those accents sound authentic. What I can say though is that the voice acting suffers from some audio quality problems. One character sounds like she’s always whispering, another may as well be recording from a cave next to a white noise generator. 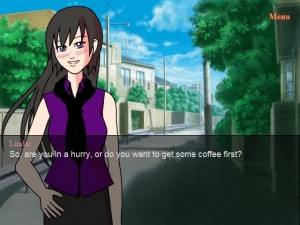 The 2009 Flash port, not to be confused with the 2009 sequel to Senior Year also called College Romance (although with a different subtitle). This Flash version is pretty shoddy from a technical standpoint and lacking in most standard VN engine features. More importantly, it doesn’t have the voice acting. 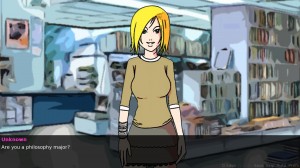 The recent commercial re-release of Senior Year. It has redone voice work and music, but other than that it’s still mostly the same as the 2006 original. It’s pretty funny how the voices are completely drowned out by the music at their default audio levels. My main problem with Alta, Texas is that it looks like completely shit. The default Ren’Py GUI looks ridiculous when stretched to 1366×768. Not only that, the 800×600 background artwork from the original was posterized, upscaled and cropped to widescreen. The freeware version looks infinitely better. Sure, the original looked kind of shitty, but I’d gladly pick fossilized shit over this turd crème brûlée.