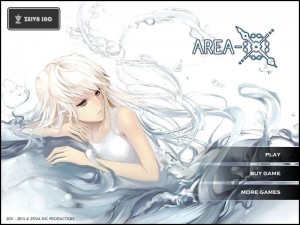 genre time travel, otome
creator Zeiva
website http://zeiva.net/otome/area_x_story.html
summary Elcia is tasked with traveling back in time to find a way to fix the environmental problems of the future.

Area-X is the latest visual novel from the creator of X-Note. Despite the similarities in name, the two aren’t connected story-wise. Area-X is more of a spiritual sequel, stylistically similar but with an entirely new story. There’s an extended X-Note cameo in the beginning, but that’s about it.

In the distant future, mankind has expended the earth’s natural resources. The global population has been decimated and the few million remaining humans are forced to live in underground cities. A time travel machine has been developed and ‘negotiators’ are being sent back in time to ‘recover’ the ‘lost natural resources’ of different eras. As you might surmise from the number of quoted terms in the previous sentence, I have no idea what the hell that’s supposed to mean and Area-X doesn’t really explain any further. Our protagonist, Elcia, is just a regular girl who just so happens to have a natural talent for time travel. To be more precise, their method of time travel involves dimensional travel in some way and Elcia is able to endure the simulator (how would you simulate such a thing?) for far longer than normal people.

As far as the sci-fi elements are concerned, Area-X seems intent on mocking itself. Much of the premise is so rickety it’s almost impossible to take seriously. It pulls some sciency sounding terms out of a hat and sprinkles them around, not really trying very hard to create a believable world. Elcia is basically chosen as the savior of mankind, but she doesn’t actually care enough to even arrive at work on time. Despite her ultra-rare time travel endurance, the operator insists on never actually making use of it and staying within the 30 minute “safe for everyone” limit. When Elcia travels to another time period, she can somehow understand and speak all languages. Her clothing also magically changes based on the time period, leading to a series of progressively sillier hats as she travels further back in time.

Giant anime hair and hats rarely get along.

I’ve never particularly been a fan of fourth wall breaking jokes and Area-X is full of those. The time machine operator starts explaining Elcia’s job to her, remarking how his explanation should be entirely redundant to her. There are also numerous references to the developer scattered around the backgrounds to the point of being immersion breaking. Perhaps the most groan-worthy for me was the way time periods are labeled — not relative to Elcia, but instead relative to our view as readers.

After some faffing about various time periods, something goes wrong with Elcia’s time machine and she literally gets to meet father time. Interestingly, Elcia doesn’t seem particularly perturbed by the existence of a magical realm that exists outside of normal space-time or its inhabitant. I had hoped this encounter would lead to some actual plot, but Elcia pretty much just goes home immediately and that’s that. As a whole, the Area-X demo consists mostly of Elcia walking around aimlessly through various time periods.

I found it really hard to care about anything. The characters are flat and the main plot isn’t explained to the point where it makes any sense. The demo ends with a cliffhanger, but the ‘twist’ is so clumsily set up it loses any emotional impact it could’ve had.

The backgrounds are generally pretty good, but they overuse gradients to where it becomes distracting. Characters have their expressions drawn in Flash and it clashes horribly with their bitmap bodies. The way character sprites are used is also rather clunky, there’s only one sprite visible at a time and sprite changes don’t use any sort of gradual dissolve. At least the presence of a good number of event CG helps ease the pain. Area-X also has an opening video, but it’s the same chuckle-inducing motivational poster fest as X-Note.

The physics of his hat are baffling.

Above average artistry is let down by the same shitty engine as X-Note. The user interface is again an amalgamation of usability nightmares such as an unlabeled exit-without-confirmation button. At least pressing the enter key no longer skips entire scenes, although having it as a dedicated button to skip the opening movie is an odd decision. You can advance the text using a keyboard, but only with the down arrow key. There’s sort of a readback function, but it’s so limited as to be basically useless. Animated background pans are nice, but they’re let down by a janky framerate (appears capped at 15 FPS). Full screen mode is painful to look at due to extreme pixelation.

Please excuse my indulgence, but I must spend another paragraph whining about the choice of icons for the user interface. The save menu is accessed through a button with a star icon, the character encyclopedia through a bar chart, and the built-in route graph is informatively categorized under ‘?’. I’d also like to point out that the save screen uses the exact same button design for ‘next page’ and ‘overwrite save without confirmation’.

The demo, rather than an introduction to the story is more like a grand tour of places where plot may potentially occur at a later time. Mishandling of serious moments and dodgy time travel mechanics combined with a dull witted protagonist don’t inspire the confidence in me to spend €25 on an indie VN when translated full-length mega budget VNs sell for roughly the same price. Based on my ‘enjoyment’ of the demo, I can’t really be arsed to read the whole thing anyway.