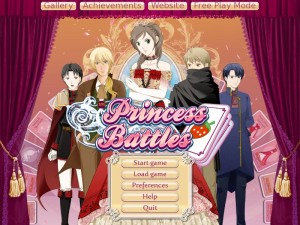 Conceptually, Princess Battles is something I should love. The premise sounds fun and I really like (trading) card games. Heck, I even kinda liked the dumb card game in Princess Waltz.

Princess Lillian (nameable) is in a pickle. While she’s been playing the role of a typical spoiled brat princess, a commoner named Olivia has been winning the favor of the public. Unfortunately for Lillian, she lives in wacky zany monarchy land where the crown princess is at risk of being tossed aside in favor of a talented commoner. Olivia has been winning every frivolous competition she enters in (jewel crafting, fencing, etc) and now Lillian’s parents are planning to marry off their only daughter and take in Olivia as the new heir. With her future at stake, Lillian sets out to beat Olivia at anything she can find, and the upcoming Prima card game tournament seems like a good opportunity for Lillian to prove her worth.

The plot in Princess Battles is there to serve the gameplay. It frames the card battles and gives some extra flavor, but doesn’t get in the way of the main attraction — playing the card game. While the game technically has romance paths, they don’t significantly change the (linear) main plot. You just get a couple of extra scenes totaling maybe five minutes or so and a slightly modified ending.

The beginning of the game is dedicated to introducing the characters, but more importantly — learning the card game. After an initial set of tutorial matches, Lillian learns about an upcoming foreign Prima tournament. Supposedly, that’s what she has been training for, but I guess she had somehow forgotten all about it (didn’t make much sense to me). The matches in the tournament further introduce the rest of the card types and once you’ve finally learned all the rules over the course of the tournament, the game just ends. Are you fucking kidding me?! The entire thing is only 2-3 hours total and it ends after the tutorial… WTF.

Aurelia’s nose is drinking some tea.

Aside from the somewhat contrived premise of a crown princess fearing to be replaced by a commoner, the plot stays mostly sane. Well, except for one point where it goes completely off the rails, going beyond even Yu-Gi-Oh levels of card game related ridiculousness. After one particularly heated card game during the tournament, Lillian is accused of cheating. Never mind that the card game was in a giant stadium with a bazillion people watching, including tournament officials. Never mind the accusation was made by a small child and only after the match was over and Lillian had already won. According to tournament rules, Lillian is considered to be guilty unless she can prove she didn’t cheat (which is impossible). Luckily for her, she’s allowed to card battle an evil spirit(?) to prove her innocence. WTF. Losing that match results in a special game over where for the rest of her life, Lillian is kept as a pet in a cage. I guess her kingdom is ok with that for some reason?

The goal of the card game is to raise your intelligence, charm and refinement stats to a predetermined limit (30/50/70/99) before your opponent raises theirs. To achieve this, you have a 5 card hand of which you can play one card each turn. The cards typically cost resources (energy/money) to play and increase some of your other stats/resources. The trick is that you run a small profit on each of these conversions, and repeatedly spending energy on money, then money on energy quickly gives you mountains of both.

It’s not a very deep game, strategically. You’ll win most matches just by aiming to raise all your stats in a balanced way, while keeping your money/energy high enough to afford the highly profitable conversion cards. At one point I tried to intentionally lose a match, but selecting the leftmost card in my hand each turn almost won me the game anyway. There’s also very little interaction with your opponents and the cards they play just don’t matter. The worst they can do is steal a card (extremely rare) or attack your automatic 10 energy/turn regeneration.

Matches are quite long — they can easily last 40 turns of more. The best way of getting through a match in a reasonable amount of time is to just continuously hold the skip key. Otherwise you have to manually click the mouse between each turn which really drags down the pace, especially when you’re waiting 5-10 turns for a specific stat raiser near the end of the game.

After each battle in the story mode, you unlock a few more cards for your deck and get 5 points to permanently increase your starting stats. There doesn’t seem to be much of an incentive to raise your stats in an unbalanced way though, making it feel kind of pointless. Also, having one of your stats reach the goal value before your other stats actually really sucks. You can’t raise stats to above the goal value, meaning all stat boosts are wasted and stat decreases become extra painful. I guess you could heavily invest in one stat, then adapt your deck to focus on raising the two others, except… you’re not allowed modify your deck during the main game.

It’s such a baffling decision to make a trading card game, then leave out the trading and deck customization parts. While you do unlock new cards throughout the story, they’re just automatically added to your existing deck. It’s very annoying every time your hand is flooded with bad cards that you can’t take out of your deck. Free play mode at least lets you customize your deck, but you start with having to make an 80 card deck out of something like 83 cards. The main problem with free play mode is that your opponents are the same as in the story mode, only now you start with maxed out base stats and a slightly better deck. Story mode is already rather easy, but in free play mode everyone becomes a complete pushover. Unlocking more cards by winning (1 random card per victory) tips the balance even further towards no challenge whatsoever.

Isn’t the fun in most trading card games collecting more cards and improving your deck? Facing lots of different opponents with wildly varying strategies and decks is also fun, but Princess Battles doesn’t really have that either — the decks of various players are mostly interchangeable. It’s only a very small card pool (28 cards) especially compared to the minimum deck size (80) and the card game feels crippled because of it.

I just remembered I hate custom mouse cursors, funny how rare those are. I don’t know what it is, but custom cursors in Ren’Py always seem to lag a bit. Something which I also hate is when new games released in 2013 are only 800×600. The low screen resolution actually causes some readability problems in the deck editor, making the cards virtually unreadable.

The sprites in Princess Battles are underwhelming for a commercial release. One (stiff) pose per character with very simplistic shading. Lillian gets a bunch of different outfits, but that doesn’t help the other characters emote or look decent. Backgrounds are pretty nice, with the occasional minor animation. Unfortunately, the more realistic look of the backgrounds doesn’t match the style of the sprites at all.

Background music for some reason keeps disappearing for entire scenes at a time. There doesn’t seem to be any sort of reason to it — did they just forget to add music? The card battling theme is pretty catchy and didn’t get annoying even after having played several dozen games with it in the background. Princess Battles also has partial voice acting. Well, more like sound bytes to be honest. The few voice samples are overused to the point of ridiculousness, something which becomes painfully clear when skipping through the story scenes on repeated playthroughs.

The textbox is weirdly narrow, somewhat similar to the one in The Royal Trap. Only Princess Battles isn’t widescreen and doesn’t use side images, so there’s even less of a reason to annoy people with excessive line wrapping. The usual polished look of the GUI sometimes completely falls apart, for example at the game over screen.

I’ve already mentioned the excessive clicking required during card battling, but there’s a much more annoying flaw that you can’t simply work around. Whenever your mouse cursor starts hovering over a playable card in your hand, a small animation plays and an incredibly annoying sound plays. The sound is one thing, but there’s also a short but oh so noticeable fraction-of-a-second freeze every time you hover over a card. It’s shockingly annoying and I’m surprised that apparently no-one noticed it before the release of the game.

The concept certainly has potential, but the card battling mechanics are too simplistic to stay interesting for very long. The game ends after what’s basically the tutorial arc and 2-3 hours is painfully short for a €20 commercial title. While the simplistic story works fine for framing some card battles, this isn’t a game you play for its deep and engaging storyline. The otome parts are superficial and minor, basically amounting to a couple of extra scenes and nothing more.