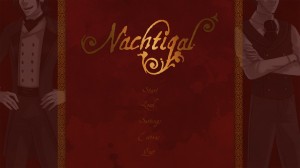 Nachtigal is the latest release by Cyanide Tea, who are best known for not yet releasing Break Chance Memento. Where their earlier works were freeware and their delayed masterpiece will be a commercial work, Nachtigal falls in the awkward middle that is donation-ware. The way it’s set up is a pay-what-you-want system with a minimum price of $0.

Miranda, a self-proclaimed Belgium expert, is on a solo trip to her favorite country when she gets lost and stumbles upon a strange castle not found on any map. Unfortunately for her, it’s inhabited by a family of vampires who chase her down and take her captive. Rather than suck her dry on the spot, they have the flimsiest of excuses to keep her around for a while. Supposedly the two vampire bishies aren’t authorized to kill by their higher ranking relatives and will need to wait two weeks for them to return from some trip.

They’re not too concerned with following their own rule though — innocuous looking decisions early on can easily cause them to suddenly flip out and kill Miranda anyway. The intent seems to establish a feeling of danger early on, but the actual choices leading to death can be a little arbitrary and the two vampires are considerably less murderous in the rest of the VN. Regardless, Miranda is their captive for two weeks until they get the official ok to finally kill her. Bizarrely, they don’t lock her up or prevent her from leaving in any meaningful way. Sure, they threaten to harm her if she tries to leave, but they also clearly intend to kill her anyway. There’s really no good reason why she doesn’t just moonwalk outta there the next time the sun comes up.

I understand the desired state is one where Miranda is forced to interact with the vampiric tag team, but it’s very odd that she doesn’t even try to escape. She hardly even considers it and although she ends up charming/befriending her captors, that’s certainly not a deliberate act on her part. Miranda seems perfectly content to die, which makes her difficult to sympathize with and weakens any horror aspects the story might’ve otherwise had.

The two vampires Miranda is stuck with are Adrian van de Nachtigal (odd Dutch/German hybrid name) and his manservant, Luca. They each have their own mini route filled with the expected amounts of tragic past and bloodlust. It’s all perfectly serviceable and there’s even a little twist in Adrian’s route, but it’s all sorely missing the sort of tension you’d expect from a vampire story. Adrian acts more like a petulant child most of the time and Miranda is never particularly fazed by the whole ordeal. If you manage to avoid both routes, there are four (short) additional endings, some of which are rather dark. Amusingly, they’re still not much worse than that one bad end in Princess Battles.

Because there is no feeling of danger, the middle part of the VN plays out almost like a sitcom with Miranda forced to hang out with her wacky vampire housemates. Frankly, it’s rather dull and doesn’t fit well with the more serious beginning and some of the darker endings.

Good lighting, weird faces. The thing that put me off most is that while everyone’s eyes are "anime-large", they’re not stylized as such and it looks a little strange. Backgrounds are somewhat simplified through the use of thick brushes and texture paint. The production values are basically on the level of a high end NaNoRenO release.

The menu system and extras are certainly more than what you’d expect from a 90 minute VN. There’s a CG gallery, music room and an ending list (much appreciated). One thing about the user interface that immediately stands out is how small the text is compared to both the textbox and to the screen. I have some other small complaints such as the noticeable lag when hovering over a clickable area of the screen for the first time. The right-click menu is a little deceptive in that it looks like a list of hotkeys, but then it turns out that some of the descriptors are clickable and open sub-menus.

I liked the music, although at times it can be overly bombastic compared to what’s going on. The best description I have for the soundtrack is Umineko-esque. One particular area where Nachtigal feels more like a commercial title is in the number and quality of its event graphics. There are 11 in total spread across the various routes and endings. They don’t have much in the way of backgrounds, but hide that fact well through the choice of camera angles and gratuitous depth of field blur.

One last thing: how the hell is it possible for vampires to blush?

Nachtigal is well put together, but the story itself is merely average. It never gets particularly tense or scary, in large part because of Miranda’s blasé response to everything that happens to her. Vampires in other stories are interesting characters because they are dangerous, manipulative and morally ambiguous. The two vampires in Nachtigal are none of those things.