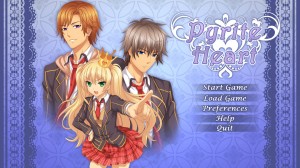 genre high school otome
creator Winged Cloud
website http://winged-cloud.com/
summary A spoiled princess bets her brother she can live as a normal girl for a week.

Clearly, I am not the target audience for this VN. The promotional artwork makes that very clear, but it’s not like I’ve ever let that stop me before.

Princess Ahri makes a bet with her older brother that she can survive outside the palace, living like a normal girl for one whole week. Several lines of exposition later and she’s enrolled in the local high school. There’s something to be said for not lollygagging around, but this is a little excessive.

The main source of conflict is Ahri’s personality. She goes for the full spoiled princess shtick, even going so far as to call her classmates ‘peasants’. While amusing, her excessive arrogance does not make her very sympathetic. She’s also quickly angered and has an obsessive drive to prove her superiority. In the beginning, she’s really quite obnoxious. It’s an interesting variation, especially for an otome game, to give the crippling personality issues to the main character rather than her love interests.

Eligible bachelor number one is school idol and class president, Ryuu. The alternate option (and his route really does feel like second choice) is Ahri’s servant, Kenta. The story plays out in subtly different ways, depending on who you hang out with, but roughly the same things happen in both routes. Ahri’s short temper somehow manages to get her into a cake baking contest with Ryuu on Friday, despite her complete lack of cooking skills. Oh noes, she’ll have to learn very quickly if she wants a chance of beating him. Ryuu’s “personality” is that he’s perfect in every way, so naturally he’s also an excellent cook. Both guys are a bit bland, but in a change from the norm they’re actually nice and aren’t tortured by a tragic past.

It’s all very much a cookie cutter shoujo manga plot. Not original, but it works. Add in some shiny art + fanservice (hint: butler outfit) and you’ve got yourself a very straightforward otome game. The writing is engaging enough to entertain for the hour or so it takes to read, but the real star here is the presentation.

High production values throughout. Unusual for a VN both free and short, Pyrite Heart has event CG in pretty much all the places you could ever want. Quality-wise they’re as good as the sprites and each CG has multiple variations that allows them to stay on-screen for longer without growing tiresome. Having the entire thing run in full HD certainly doesn’t hurt either.

Unlike most of its competitors, Pyrite Heart actually looks like a modern VN. What I mean by that is not so much the artwork, but rather all the little graphical things allowed by modern hardware. For example, when the textbox (dis)appears, it happens with an animated transition (movement + fade). Scene transitions are accompanied by screen wipes and while that’s not very hard to implement, it’s rare to see someone actually bother.

Not everything is flawless though. The sprites are a bit static due to the lack of distinct poses (only an alternative arm position at most). Plot demanded costume changes at least partly make up for it. None of Ahri’s classmates (other than Ryuu) have any sprites which makes scenes where she interacts with them a little strange. The lack of a CG gallery is also disappointing. What I personally found extremely annoying, although I’m perhaps in the minority, is that in some menus the VN take control of the mouse cursor to automatically move it to the default option. I know some Japanese VNs do that as well, but it continually causes me to misclick.

The background music and sound effects are uncredited for some strange reason.

It’s cute fluff; pretty and harmless. The story chews through clichés like a fat kid through cake, but they’re all things that work on a basic emotional level. If you like shoujo manga, you’ll probably like this.