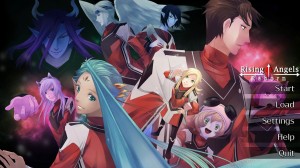 You may have heard of another VN sharing the name Rising Angels. Reborn is part sequel, part reboot — some characters return and previous events are hinted at, but no knowledge of the previous installment is necessary.

The first ten minutes of Rising Angels – Reborn attempt to simultaneously introduce the characters, races, culture and military structure of its complex world. After a while, all that talk about the fox people of planet yip or whatever just turns into meaningless gobbledegook. Thankfully, it’s mostly limited to the opening scenes and the rest of the VN dispenses background information at a more leisurely pace.

Alphonse (left) does -nothing- in the entire VN.

A young officer, Natalie Pucille, gets to lead the investigation into a missing group of scientist who were researching a mysterious artifact left by an ancient, technologically advanced civilization. While not the most novel setup for a sci-fi story, that does not necessarily make it a bad one and the first hour or so of the VN is genuinely enjoyable. Gradually however, dubious plot developments start to pile up and eat away at the believability. With increasing frequency, any dilemmas put forth end up being solved not through new insights, but rather characters finally remembering to share critical information with each other.

Some of that reluctance to share can be explained by the presence of a saboteur. While in the process of trying to analyze some ancient runes, Natalie’s research lab is smashed and her data destroyed. There’s clearly a traitor on board, although no-one seems particularly concerned with finding out who it is. The ship’s commander does not seem to care in the slightest and refuses to believe foul play is involved. Partly because she appears to be impervious to any form of logic or reason, but also because all the other characters are terrible at expressing their suspicions. When Natalie does some medical tests and finds irrefutable evidence of foul play, someone manages to delete all traces of it from the ship’s computer. Natalie’s response is to just give up, keep her conclusions to herself and not bother to further investigate the suspected traitor.

Their ship is also rather ill-equipped to deal with malicious intent. Locked doors can be opened by any crew member, external communications aren’t monitored, and there’s no internal surveillance whatsoever — not even logging lab/computer access. Also, the central computer can apparently be reprogrammed by random crew members to take away the privileges of the highest ranking officer.

The identity of the traitor is so blatantly obvious, it couldn’t possibly be Stan. Yet it is. The sexual harassment demon who tries to avoid treating a wounded crew member, who would ever have thought he was up to no good. Early on, you can still kind of make a case for him just being simultaneously incompetent and a giant asshole, but his suspicious behavior grows to ludicrous proportions by the final act.

Sometimes character moments feel like they get a disproportionate amount of attention compared to the main plot. Part of the reason is that the (linear) VN railroads you toward its sole romantic pairing: Natalie and dragon-girl Zuri. Sadly, I don’t really give a shit about Zuri.

While Rising Angels – Reborn has choices and multiple endings, in essence it’s almost entirely linear. All endings but one are just bad ends. The canonical path doesn’t give any closure either — it ends yet again with a "to be continued" screen. At the final decision there’s strangely no option to destroy the dangerous anti-crystal, despite one of the bad ends proving that would’ve been a viable option.

The biggest letdown in the presentation is the lack of any sort of animated transition or screen wipe. When something on the screen changes, it almost always does so instantaneously. It makes the VN feel cheap and rushed, despite the above average artwork (and sprites actually have multiple poses).

Sol’s sprite bugs the hell out of me though. His default pose has one shoulder hidden completely behind his body, resulting in an odd-looking silhouette. Also, he has a weird-ass head. Who knows, maybe one of his parents was secretly half-horse.

When most of your story takes place on small spaceship, background variety is hard to achieve. This amount of bare metal is probably realistic with a low-end military craft, but it’s sure dull to look at. Two short trips to a planet’s surface break up the monotony at least somewhat.

Rising Angels – Reborn has some special features, but odd implementation choices lower their effectiveness. A special vocal music track is used on the title screen, but nowhere else. Seeing as you spend maybe 5 seconds there, it seems wasteful. There’s also a CG gallery, but it’s hidden within the in-game encyclopedia, which is hidden within the right-click menu. The event CG themselves vary a lot in quality, between on-par with the sprites to significantly worse.

The main issue is stretching credibility too thin and propelling the plot forward through increasingly improbable means. The lackluster ending doesn’t resolve anything and the focus on Zuri can feel arbitrary.