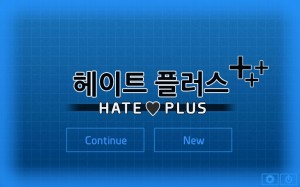 genre sci-fi, drama
creator Love Conquers All Games
website http://hateplus.com/
summary A more detailed look at the events leading up to those in Analogue: A Hate Story.

One important aspect of the story of Analogue was left unsolved by the end — what could possibly transform a modern society into a copy of Joseon era Korea? Hate Plus attempts to show how a series of seemingly reasonable political decisions could set this decline into motion. This review will be full of spoilers, so stop reading now if you don’t want to know what happens.

The main problem with Hate Plus is that the explanation it offers just isn’t very interesting. Instead of a slow decent into madness, we see a dysfunctional aristocracy be replaced with a dictatorship. Every new discriminatory policy change is not coincidental, but rather the result of a deliberate effort by an evil mastermind of sorts. The threat of falling back to medieval bigotry is made far less credible when so little of it is by accident.

Despite attempts to make the changes towards ‘traditional’ values seem gradual and sensible, the ruling council (in effect a hereditary aristocracy) habitually ignores the obvious side effects of their new legislation. Their complete lack of foresight is one thing, but I would at least expect some complaints from the people whose lives are negatively affected. For example, why wouldn’t noblewomen complain about a sudden and unmotivated decision to make nobility effectively hereditary only through the male line? The repercussions of the change for unmarried noblewomen isn’t even brought up during the council meeting. It almost makes sense if you assume society aboard the Mugunghwa is already a sexist, classist dystopia ruled by a literal patriarchy with no regards for women’s rights. But if it’s already that bad, what’s the difference with Analogue?

It’s not just women and peasants who idly stand by as their rights are taken away. The council members are perfectly happy to let themselves be removed from office. Due to pressure from rioting commoners, they agree to let the members of the council be decided through a meritocracy exam. I feel the need to point out something blatantly obvious that Hate Plus more or less glances over (seemingly intentional) — if anyone were to manipulate the contents/results of the meritocracy exam, that person could thereby take control of the council and rule the ship by proxy. With that in mind, the utter lack of fraud prevention measures seems odd to say the least. It’s also strange that *Mute didn’t really disagree with the meritocracy exam, despite its obvious risks to the stability of the government.

Hate Plus doesn’t merely consist of dry registrations of council meetings. A large portion is devoted to diary entries and other personal correspondence from several key figures (and a few representatives of the common folk). These serve to add a flair of humanity and show the repercussions of each political change on the populace. Unfortunately, they also have a tendency to derail into inconsequential relationship drama./p>

Whichever AI partner is active (depending on the route *Hyun-ae and/or *Mute) will occasionally comment on the contents of the logs you’re reading. *Mute’s comments are often pretty interesting, especially when she’s commenting on her own behavior prior to her memory wipe in year 0. *Hyun-ae on the other hand rarely has anything useful to say and often just resorts to complaining that the council proceedings are boring or that she doesn’t understand. The *Hyun-ae and harem routes could’ve been omitted entirely — the whole story is about *Mute’s past anyway.

Hate Plus shows the journey from a dysfunctional aristocracy to a dysfunctional dictatorship. Council members keep voting for discriminatory and foolish laws without any consideration for the obvious consequences. The people disadvantaged by those laws appear to be somehow incapable of organizing any serious amount of protest. I just don’t find any of it very believable.

Like Analogue, you spend most of your time reading static logs. Thankfully this time around you at least get to read them in mostly chronological order. Considering the logs are still written by a dozen different authors with similar sounding Korean names, every little bit helps.

Hate Plus is full of misguided mechanics that only detract from your enjoyment. For example, each route takes place over the course of three days. After reading a set number of logs, the day ends and you’re prevented from continuing until 12 hours have passed (real time). Why the need to drip-feed information rather than just letting you read the damned thing? The time delay makes (re)playing the other routes a miserable experience, something which is further compounded by the lack of an efficient way to skip past logs seen in previous playthroughs. Downloading new logs is similarly tedious, requiring pointless manual interaction and a wait at a fake load screen.

The visual aspect is about as limited as it was in Analogue — you still spend the majority of your time reading static text on a neutral background. Clicking on names of people mentioned in the text now pops up an info page about that person, sometimes accompanied by a portrait. These portraits are drawn in a realistic style that seems very out of place compared to the stylized look of *Hyun-ae and *Mute.

Christine Love’s works are usually quite well made from a technical level, but Hate Plus suffers from all kinds of problems. Every single time the mouse cursor enters a clickable area, there’s a very noticeable lag in not only the background animation, but in the movement of the cursor as well. Longer log entries are now scrollable rather than paginated, but the scroll bar is non-functional and you’re forced to use the mouse wheel. When the AI characters give comments on whatever it is you’re reading, the accompanying sprite change temporarily disables the capacity to scroll (causing even more lag).

With so little going on visually, there was room for the soundtrack to be more prominent than in other visual novels. Sadly, the music in Hate Plus is as minimalist as the rest of the presentation, consisting of a rather unexciting stream of ambient tracks.

Nothing quite works as intended and there’s a lot of padding for little payoff. The real-time delay between days is a terrible game mechanic and completely sucks the enjoyment out of repeated playthroughs. Not that any route other than *Mute’s is worth reading anyway.

4 thoughts on “[review] Hate Plus”