I’ve added pages to the save/load screen, you now get 10 pages with 10 save slots each. This should fix the crashes some people were having when using 20+ save slots. It also provides a little bit of structure to the saves (for example, you could use a different page for each route).

Auto read should be working properly now, even in edge cases. I didn’t write a post for v1.5.6, but I decided to finally request the permission required to keep the screen on even when there’s no user input. When you add auto read, it suddenly becomes extremely important.

I’m working on a better save/load screen that scales better to 20+ saves without having to scroll through a giant list. Probably something paginated with a fixed number of save slots per page, though I haven’t picked a final design yet.

Support for the 07th Inquisition Spanish translation patch has been added. Make sure the translation patch is located in a subfolder named "[07th Inq] Umineko Esp". A message with the detected game language (Spanish, English, Russian) is printed early during the conversion (check it to make sure your patch is being picked up correctly).

Converts an installed copy of “Shikkoku no Sharnoth” to a version playable with VNDS. The converter should also work on the unpatched Japanese version. I don’t know what would happen if you tried to convert the recent Full voice ReBORN edition.

Converts an installed copy of “Sekien no Inganock” to a version playable with VNDS. The converter should also work on the unpatched Japanese version. I don’t know what would happen if you tried to convert the recent Full voice ReBORN edition.
Changelog: 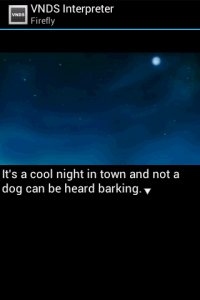 I haven’t really posted about this since the first release. It’s interesting to see how much has changed in just over a year (several new Android OS releases, for one). Very little code is Android-specific, so dealing with new OS releases is usally not a problem. That is, until suddenly the pysical menu button disappears and is replaced by an icon in the (hidden) title bar and there’s no way to access the menu…

Anyway, about the 1.5 update. The most noticeable change is the new text fade-in. Enabling it required a bit of optimization in the text rendering, and a whole bunch of rewriting of the text display code (probably the most complex part of the app). The tricky bit is doing the text layout only once (for the full text), then rendering only the first N characters (or making all characters after N invisible, ha).

I you encounter a bug, the fastest way to get it fixed is by contacting me via email.

To download, scan the above QR code with a barcode scanner or search for “VNDS Interpreter” in the Android market.

Converts an installed copy of Umineko EP 1~8 to a version playable with VNDS.